The history of the star: Yed Prior 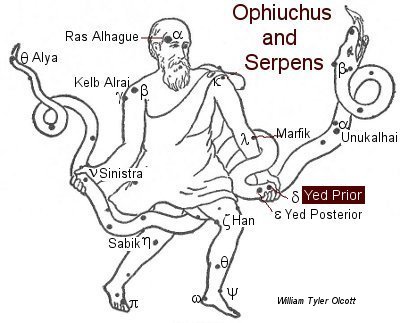 Delta (δ) Ophiuchus, Yed Prior, is a deep yellow star in the left hand of the Serpent Bearer.

Yed Prior, the Former of the two stars in the Hand,— the Arabic Yad (“hand”),— originating with the 17th century German astronomer Bayer, adopted by Flamsteed, and now common. It is sometimes written Jed

It was Leang, a Mast, in China.

Epsilon (ε Yed Posterior), delta (δ, this star Yed Prior) zeta (ζ Han), eta (η Sabik) of Ophiuchus, along with alpha (α Unukalhai), delta (δ), and epsilon (ε) of Serpens, constituted the Nasak al Yamaniyy, “the Southern Boundary Line of the Raudah”, or “Pasture”, which here occupied a large portion of the heavens; other stars in Ophiuchus and Hercules forming the Nasak al Shamiyyah, or Northern Boundary. The stars between these two Nasak or boundaries marked the Raudah or pasture itself and Al Aghnam, the Sheep within it, now the Club of Hercules (Kajam is the main star). These sheep were guarded by the Shepherd and his Dog, the two lucidae or alpha stars marking the heads of Ophiuchus (Ras Alhague the Shepherd) and Hercules (Ras algethi the Dog).

Delta (δ, this star Yed Prior) and epsilon (ε Yed Posterior) point out the left hand grasping the body of the Serpent (Serpens); tau (τ) and nu (ν, Sinistra), the other hand, holding the tail.

According to Ptolemy it is like Saturn and moderately like Venus. It is said to give a passionate, blindly good-hearted, wasteful and easily seduced nature, unseen dangers, enmity and slander. Pliny said that it occasioned much mortality by poisoning. This constellation has also been called Aesculapius and held to rule medicines. By the Kabalists it is associated with the Hebrew letter Oin and the 16th Tarot Trump “The Lightning Struck Tower”. [Robson, p.54.]

The astrological influences of the star Yed Prior

Of the nature of Saturn and Venus. It causes immorality, shamelessness and revolution. [Robson, p.218.]