The history of the star: Ras Alhague

from p.300 of Star Names, Richard Hinckley Allen, 1889.
[A scanned copy can be viewed on this webpage

Alpha (α) Ophiuchus, Ras Alhague, is a sapphire star on the head of the Snake Charmer. 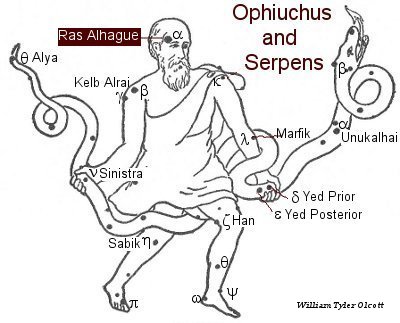 The occasional Azalange has been traced to the Turkish title for the constellation; but "a universal star-name from that nation does not seem probable," and it is more likely that the Turks adopted and altered the Arabic. Ras al Hayro also has been seen for the star; and the Century Cyclopedia mentions Hawwa as rarely used.

The 13th century Persian astronomical writer Al Kazwini cited Al Ra’i, the Shepherd, from the early Arabs, which, although now a title for gamma (γ) Cepheus (Alrai), may have come here from the adjacent Raudah, or Pasture; the near-by alpha (α) Hercules (Ras Algethi), 6° to the west, being Kalb al Ra’i, the Shepherd’s Dog; while neighboring stars, the present Club of Hercules, marked the Flock.

In China alpha (α Ras Alhague) was How, the Duke; and the small surrounding stars, Hwan Chay, a title duplicated at those in the hand.

The astrological influences of the star Ras Alhague

According to Ptolemy it is of the nature of Saturn and Venus; and, to Alvidas, of Jupiter and Mercury in sextile to Mars. It gives misfortune through women, perverted tastes and mental depravity. [Robson, p.193.]

It has a Saturn like character, and some of the undesirable Venus qualities are also present. Connected with these are Neptunian tendencies, making the native especially prone to infectious contamination caused by toxins. People thus influenced are easy going in the use of medical drugs, hallucinatory drugs stimulating foodstuffs, too much good living and overindulgence in tobacco and alcohol. There is danger of insect bites, snakebites or assault from infuriated animals or rabies smitten dogs. If conjunct the Moon, Mars, or Neptune, the native is very prone to infections in general and to epidemic infections. Besides the lower emanations, there are supposedly higher influences attributed to this star, ‘though only very few people are able to attune themselves to these influences’. [Fixed Stars and Their Interpretation, Elsbeth Ebertin, 1928, p.72-73.]

With Mercury: Unpopular attitude and criticism through religion, philosophy or science; difficulties in marriage and quarrels fostered by others, trouble through opposite sex, not very good for gain. [Robson, p.193.]

With Mars: Trouble through writings, public censure in connection with religion, science or philosophy. [Robson, p.193.]

With Jupiter: Diplomatic, religious or legal preferment, but some criticism, favorable for gain. [Robson, p.194.]