The history of the star: Han 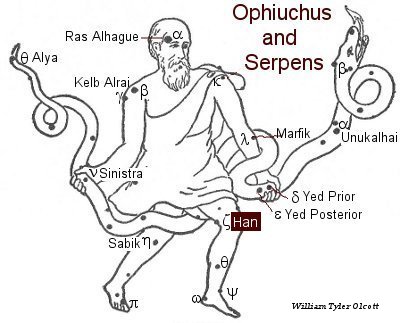 Zeta (ζ) Ophiuchus, Han, is a small star situated near the left knee of the Serpent Holder.

It sometimes shared with eta (η, Sabik) the title Sabik, or Preceding One, attached to the latter star in Al Tizini’s catalogue (Arabian astronomer, first half of 16th century).

Brown thinks that, with epsilon (ε Yed Posterior), it marked the Akkadian lunar asterism Mulu-bat, the Man of Death; with eta (η Sabik), theta (θ ), and xi (ξ), the Persian Garafsa, or Serpent-tamer; with eta (η Sabik), the Sogdian Iranians Bastham, Bound,” i.e. Ophiuchus enveloped in the coils of Ophis”; and the Khorasmian (east of Persia) Sardhiwa, the Head of the Evil One.

It was the Chinese Han, an old feudal state.

Epsilon (ε Yed Posterior), delta (δ Yed Prior) with this star zeta (ζ Han), and eta Ophiuchus (η Sabik) and alpha (Unukalhai), delta (δ), and epsilon (ε) of Serpens, constituted the Nasak al Yamaniyy, the Southern Boundary Line of the Raudah, or Pasture, which here occupied a large portion of the heavens; other stars in Ophiuchus and Hercules forming the Nasak al Shamiyyah, or Northern Boundary.

The astrological influences of star Han

Of the nature of Saturn and Venus. It brings trouble and disgrace. [Robson, p.172.]