The history of the star: Unukalhai

Alpha (α) Serpens, Unukalhai, is a pale yellow star in the neck of the Serpent. 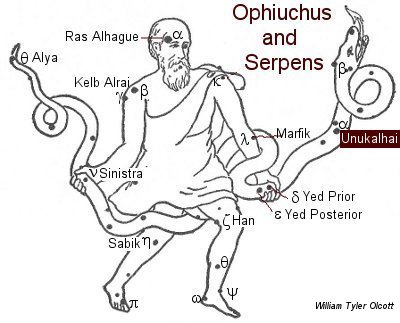 Unukal Hay— or Unukalhai,— is from Unuk al Hayyah, the Neck of the Snake, the later Arabic name for this star.

It was also Alioth, Alyah, and Alyat, often considered as terms for the broad and fat tail of the Eastern sheep that may have been at some early day figured here in the Orientals’ sky; but we know nothing of this, and these are not Arabic words, so that their origin in Al Hayyah of the constellation is more probable.

The English astronomer Smyth (1788-1865) somewhat indefinitely states that Alangue and Ras Alaugue appear in the Alfonsine Tables, presumably for this star.

With lambda (λ) it was known as Shuh, the title of certain territory in China; and Edkins rather unsatisfactorily writes :

"The twenty-two stars in the Serpent are named after the states into which China was formerly divided."

As their radiant point it has given name to the Alpha Serpentids of the 15th of February.

Ophiuchus means ‘he who holds the serpent‘ and that is how he is depicted. The struggle will last forever, since they wage it on equal terms with equal powers". [Manilius, Astronomica, 1st century AD, book 1, p.31]

The astrological influences of the constellation Serpens

Legend: When Glaucus, son of Minos, King of Crete, was drowned in a barrel of red honey, Aesculapius was sent for to restore him to life and was shut in a secret chamber with the body. While he stood wondering what to do a serpent entered, which he slew. Thereupon another serpent came in bearing a herb which it placed on the head of the dead serpent, thereby restoring it to life, and Aesculapius, using the same herb, succeeded in restoring Glaucus. The serpent (Serpens) was placed in heaven and for this reason certain writers have identified Ophiuchus with Aesculapius. According to other accounts the serpent is one of those that would have slain Hercules in his cradle (see Ophiuchus). [Robson, p.61.]

Influences: According to Ptolemy, Serpens is like Saturn and Mars. It is said to give wisdom, craft, deceit, malice, a feeble will and danger of poison. [Robson, p.62.]

The astrological influences of the star Unukalhai

Notes. A pale yellow star situated on the neck of the Serpent. From Unk al Hayyah, the Neck of the Snake. Sometimes called Cor Serpentis, the Serpent’s Heart (a snake’s heart is located in its neck). [Robson, p.213.]

Influences: According to Ptolemy it is of the nature of Saturn and Mars; to Simmonite, of Saturn and Venus; to Pearce, of Saturn, Venus and Mars; and, to Alvidas, of Mars and Saturn in opposition to Venus. It gives immorality, accidents, violence and danger of poison. [Robson, p.213.]

In the Neck of the Serpent (Serpens), Unukalhai shows its properties as a Martian force combined with Saturn and is often really dangerous and destructive. There will be chronic diseases, which are not easily detected, these will result in a weakened state of health and operations will be necessary. There will be accidents. This is especially true with Uranus or with Neptune. The conjunction of the latter with Unuk will make the native prone to infectious diseases and also to poisoning. If with the MC and in conjunction also with ‘malefics’ it is damaging to the social position, often there will be many difficulties in the professional life. [Fixed Stars and Their Interpretation, Elsbeth Ebertin, 1928, p.67, under the name Unuk.]

With Sun: Many quarrels and disappointments, unfortunate life, seriously affected by death of family or friends. [Robson, p.213.]