The history of the star: Sabik 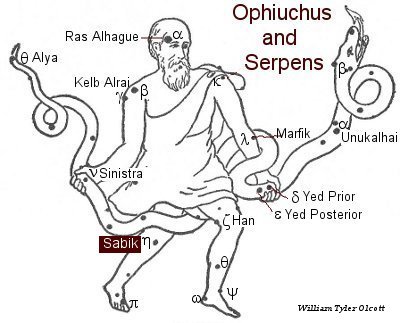 Eta (η) Ophiuchus, Sabik, is a star on the right leg of the Serpent Bearer.

It is Sabik with Al Tizini (Arabian astronomer, first half of 16th century), zeta (ζ Han) often being included; but Beigel thought that the name should be Saik, the Driver.

This star eta was also included with theta (θ) and xi (ξ) in the Egyptian Coptic Tshio, “the Snake”, and Aggia, “the Magician”. These same stars were the Akkadian Tsir, or Sir, “the Snake”.

Zeta (Han) with eta (η, this star Sabik), were the Sogdian Bastham, “Bound”, i.e. “Ophiuchus enveloped in the coils of Ophis” and they were the Khorasmian Sardhiwa, the “Head of the Evil One” [although this star is not anywhere near the head of the snake Serpens].

Epsilon (ε, Yed Posterior), delta (δ Yed Prior) zeta (ζ Han), eta (η, this star Sabik) of Ophiuchus, along with alpha (α Unukalhai), delta (δ), and epsilon (ε) of Serpens, constituted the Nasak al Yamaniyy, “the Southern Boundary Line of the Raudah”, or “Pasture”, which here occupied a large portion of the heavens; other stars in Ophiuchus and Hercules forming the Nasak al Shamiyyah, or Northern Boundary. The stars between these two Nasak or boundaries marked the Raudah or pasture itself and Al Aghnam, the Sheep within it, now the Club of Hercules (Kajam is the main star). These sheep were guarded by the Shepherd and his Dog, the two lucidae or alpha stars marking the heads of Ophiuchus (Ras Alhague the Shepherd) and Hercules (Ras algethi the Dog).

In China it was Sung, another of the early feudal states.

The astrological influences of the star Sabik

According to Ptolemy it is of the nature of Saturn and Venus; and, to Alvidas, of Jupiter and Venus. It causes wastefulness, lost energy, perverted morals, and success in evil deeds. [Robson, p.199.]

With Moon: Secret enmity and jealousy, trouble through relatives, successful but not wealthy, success in breeding stock. [Robson, p.199.]

With Mars: Unorthodox or heretical religious views that may cause trouble, domestic disharmony, trouble through love affairs. [Robson, p.199.]

With Jupiter: Material success, preferment in Church or law but criticized, gain through large animals, trouble through relatives. [Robson, p.199.]

With Saturn: Industrious, persevering, economical, strong passions, trouble through some active indiscretion affecting whole life, trouble and disappointment in love affairs, secret help from female friends which may cause scandal, success especially in latter part of life in affairs of an earthy or Sagittarian nature, but little prominence. [Robson, p.200.]

With Uranus: Sincere, sober, retiring, melancholy, thoughtful, calm and patient in trouble, clergyman or associated with the Church, some physical disability, separated from friends and relatives, some great sorrow in the life, occupied in doing good but disappointed in results, rarely marries. [Robson, p.200.]