The history of the star: Yed Posterior 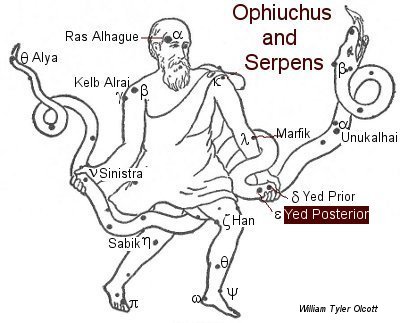 Epsilon (ε) Ophiuchus, Yed Posterior, is a red star in the left hand of the Serpent Bearer.

Yed Posterior, meaning the star Behind, Following or succeeding one of “the Hand”, delta (δ), is found on our modern lists, but was not given by the 17th century German astronomer Bayer.

In China it was Tsoo, the name of one of the feudal states; and, with iota (ι) and some other stars, is said to have formed Hwan Chay

Epsilon (ε, this star Yed Posterior), delta (δ Yed Prior) zeta (ζ Han), eta (η Sabik) of Ophiuchus, along with alpha (α Unukalhai), delta (δ), and epsilon (ε) of Serpens, constituted the Nasak al Yamaniyy, “the Southern Boundary Line of the Raudah”, or “Pasture”, which here occupied a large portion of the heavens; other stars in Ophiuchus and Hercules forming the Nasak al Shamiyyah, or Northern Boundary. The stars between these two Nasak or boundaries marked the Raudah or pasture itself and Al Aghnam, the Sheep within it, now the Club of Hercules (Kajam is the main star). These sheep were guarded by the Shepherd and his Dog, the two lucidae or alpha stars marking the heads of Ophiuchus (Ras Alhague the Shepherd) and Hercules (Ras algethi the Dog).

Delta (δ Yed Prior) and epsilon (ε, this star Yed Posterior) point out the left hand grasping the body of the Serpent (Serpens); tau (τ) and nu (ν, Sinistra), the other hand, holding the tail.

Epsilon (ε, this star Yed Posterior) was also the Euphratean Nita χ-bat, the “Man of Death”.

Coincidentally (!) “in modern astrology, which contains some singular survivals, the Hand of Ophiuchus is said to be a star “of evil influence”.