The history of the star: Ras Algethi

from p.243 of Star Names, Richard Hinckley Allen, 1889.
[A scanned copy can be viewed on this webpage 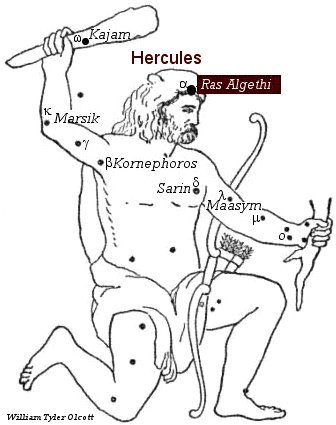 Alpha (α) Hercules, Ras Algethi, is a double star and both irregularly variable, 3.1 to 3.9 and 5 to 7, orange red and bluish green in the head of the Kneeling Man.

The nomads’ title for it was Al Kalb al Ra’i, the Shepherd’s Dog, that our alpha (α Ras Algethi) shared with the adjoining lucida (brightest star in a constellation) of Ophiuchus (Ras Alhague), 5° distant which was the Shepherd.

The Chinese called it Ti Tso, the Emperor’s Seat; and Tsin. Some small stars in Hercules, near alpha (α Ras Algethi), were included with iota (ι) and kappa (κ) Ophiuchus in the asterism Ho, one of the measures of China.

Hercules, the figure on bended knee and called by the Greek name of Engonasin, about whose origin no certainty prevails. Of this constellation is begotten the desertion, craftiness, and deceit characteristic of its children, and from it comes the thug who terrorizes the heart of the city. If perchance his mind is moved to consider a profession, Engonasin [a Greek title for constellation Hercules meaning Kneeler] will inspire him with enthusiasm for risky callings, with danger the price, for which he will sell his talents: daring narrow steps on a path without thickness, he will plant firm feet on a horizontal tightrope; then, as he attempts an upward route to heaven, (on a sloping tightrope) he will all but lose his footing and, suspended in mid-air, he will keep a multitude in suspense upon himself”. [Manilius, Astronomica, 1st century, AD, p.353.]

The astrological influences of the star Ras Algethi

“The head of the kneeling Hercules”, possesses a character of Mars-Venus with a slight blend of Mercury. If in good aspect, it is supposed to give much enjoyment and favors from women. However, if unconnected with helpful planets, it is said to cause much irritation, especially in connection with the female sex. But, by its very Mars nature, Ras Algethi corresponds to boldness and a drive to gain power. [Fixed Stars and Their Interpretation, Elsbeth Ebertin, 1928, p.72.]

If Rising: The star Ras Algethi presages both the good and bad sides of Saturn. When rising it can mean a wise and clever man, but can also indicate an individual trained in various tricks, a liar who deceives with different kinds of plots. Aspects of the horoscope (Ascendant) by Mars when Ras Algethi is rising is indicative of an aggressive personality who always displays an unbridled hostility to those he comes in contact with. When setting the star is indicative of a native whose life will be affected by devious plots. [Fixed Stars and Judicial Astrology, George Noonan, 1990, p.11-12.]