The history of the star: Polis 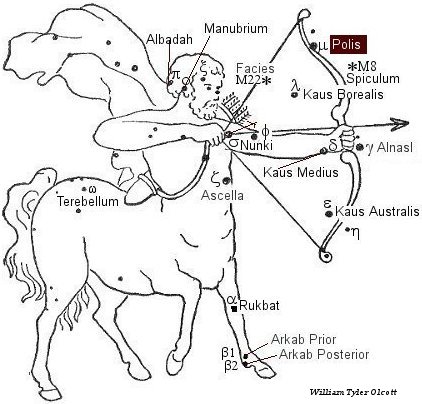 They mark the point of the winter solstice two thirds of the way southward towards, and in line with, the cluster N.G.C. (New Galaxy Catalog) 6523, 8 M., visible to the naked eye, with other noticeable clusters and nebulae close by. One of these, N.G.C. 6603, 24 M., towards the northeast, is Secchi’s Delle Caustiche, from its peculiar arrangement of curves, while the celebrated Trifid Nebula, N.G.C. (New Galaxy Catalog) 6514, 20 M., lies not far off to the southwest.

Brown says that the stars in the bow were the Persian Gau and the Sogdian Iranian and Khorasmian (east of Persia) Yaugh, but by these nations were imagined as a Bull; the Copts (who are now the Christians in Egypt) knew them as Polis, a Foal.

This star Polis, with lambda (Kaus Borealis) (the stars in the northern part of the Bow), were the Arabic Ra’i al Na’aim, the “Keeper of the Na’ams”. In ancient Arabia the two small groups of stars now marking the head and the vane of the Archer’s arrow were of much note as relics of still earlier asterisms, as well as a lunar station. The westernmost of these, — gamma (Alnasl), delta (Kaus Medius), epsilon (Kaus Australis), and eta — were Al Na’am al Warid, the Going Ostriches; and the easternmost, — sigma (Nunki), zeta (Ascella), phi, chi, and tau, — Al Na’am al Sadirah, the Returning Ostriches, passing to and from the celestial river, the Milky Way, with lambda (Kaus Borealis) and these stars mu and mu ( this star Polis), as their Keeper; Ra’i al Na’aim, the “Keeper of the Na’ams”, or Al Thalimain, meaning desert birds.

The astrological influences of the star Polis

Notes: A triple star in the upper part of the bow of Sagittarius. From the Coptic Polis, a Foal.

This Jupiter-Mars star shows up in a horoscope with almost the regal qualities of mighty Regulus. Only this star, Polis will indicate more of the high office in spiritual life, Pope, Iman, Archbishop, or at least a prominent Theologian, than in the temporal world of kings and statesmen. Unfavorably aspected, however, it may show more the self-styled pretender to dignity, or the one who on gaining appointment fails to meet expectations. If better aspected, but not aided by Sun or 10th, say, then we still have someone whose interest and knowledge of things spiritual may be both keen and profound. [The Living Stars, Dr. Eric Morse, p.93,94.]