The history of the star: Kaus Australis

from p.358 of Star Names, Richard Hinckley Allen, 1889.
A scanned copy can be viewed on this webpage 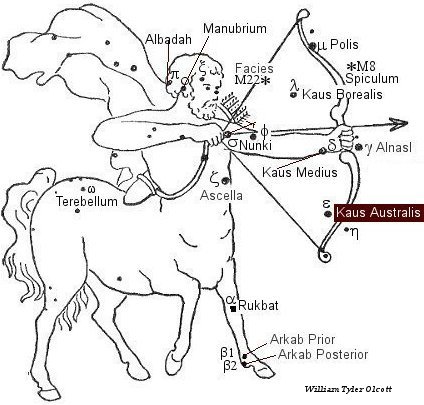 In ancient Arabia the two small groups of stars now marking the head and the vane of the Archer’s arrow were of much note as relics of still earlier asterisms, as well as a lunar station. The westernmost of these, — gamma (Alnasl), delta (Kaus Medius), epsilon (this star Kaus Australis), and eta — were Al Na’am al Warid, the Going Ostriches; and the easternmost, — sigma (Nunki), zeta (Ascella), phi, chi, and tau, — Al Na’am al Sadirah, the Returning Ostriches, passing to and from the celestial river, the Milky Way, with the stars lambda (Kaus Borealis) and mu (Polis) for their Keeper.

The astrological influences of the star Kaus Australis

Quiet in nature with its Venus spectra. Associated with the Goddess Istar. [Fixed Stars and Judicial Astrology, George Noonan, 1990, p.36.]