The history of the star: Nunki 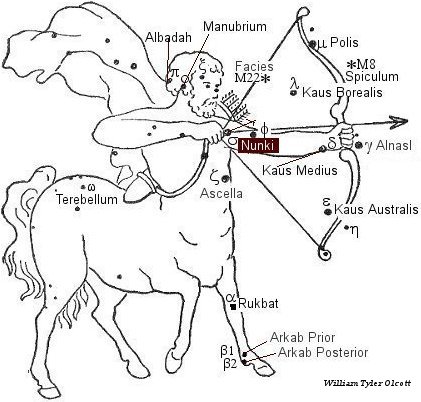 Sigma (σ) Sagittarius, Nunki, is a star on the vane of the arrow in the archer’s hand.

This has been identified with Nunki of the Euphratean Tablet of the Thirty Stars, the Star of the Proclamation of the Sea, this Sea being the quarter occupied by Aquarius, Capricornus, Delphinus, Pisces, and Piscis Australis. It is the same space in the sky that  the Greek astronomer Aratus, circa 270 B.C., designated as the Water; perhaps another proof of the Euphratean origin of much of Greek astronomy.

In India it marked the junction of the nakshatra (Hindu Moon Mansion) Ashadha with Abhijit.

It lies on the vane of the arrow at the Archer’s hand.

Sigma (σ Nunki), with zeta (ζ Ascella) and pi (π Albadah), may have been the Akkadian Gu-shi-rab-ba, the Yoke of the Sea.

In ancient Arabia the two small groups of stars now marking the head and the vane of the Archer’s arrow were of much note as relics of still earlier asterisms, as well as a lunar station. The westernmost of these, — gamma (Alnasl), delta (Kaus Medius), epsilon (Kaus Australis), and eta — were Al Na’am al Warid, the Going Ostriches; and the easternmost, — sigma (this star Nunki), zeta (Ascella), phi, chi, and tau, — Al Na’am al Sadirah, the Returning Ostriches, passing to and from the celestial river, the Milky Way, with the star lambda (Kaus Borealis) for their Keeper.

Listed as Pelagus (Latin for “sea”) in Vivian Robson’s book.

Influences of the 18th Arabic Moon Mansion Al Na’am: Helps the taming of wild beasts, strengthening of prisons, destroys the wealth of societies and compels a man to come to a certain place.

With Moon transiting here: build, ask favors but do not marry. [Robson, p.73.]

Influences of the 18th Hindu Moon Mansion Purva Ashadha: A severe asterism belonging to the Brahmin caste and favorable for acts of disgrace, destruction, deceit, imprisonment, beating, burning and poison when containing the Moon. Those born on the lunar day will be truthful, cleanly, wealthy, fond of fruit and flowers and sea voyages. With Moon here at birth native will be conceited, proud, constant in friendship and will have an agreeable life. Rules thatched houses and the back. [Robson, p.83.]

The astrological influences of the star Nunki or Pelagus

According to Ptolemy it is of the nature of Jupiter and Mercury; and, to Alvidas, of Saturn and Mercury. It gives truthfulness, optimism and a religious mind. [Robson, p.180.]

Pelagus (Nunki) is an indicator of one who may be expected to be an authoritative orator on Sagittarius and Capricorn topics on business, state or foreign affairs, religion. Interest in long distance travel and in ships and airplanes. [The Living Stars, Dr. Eric Morse, p.95-96.]

With Venus: Heart rules head, favors from opposite sex, many friends. [Robson].

With Saturn: Thoughtful, reserved, self-centered, success delayed until after 50, ambition thwarted by enemies, danger of disgrace, wealth at end of life, trouble to parents, favorable marriage late in life, usually at least one child. [Robson, p.180.]