The history of the star: Ascella

Zeta (ζ) Sagittarius, Ascella, is a star under the left armpit of the Archer. 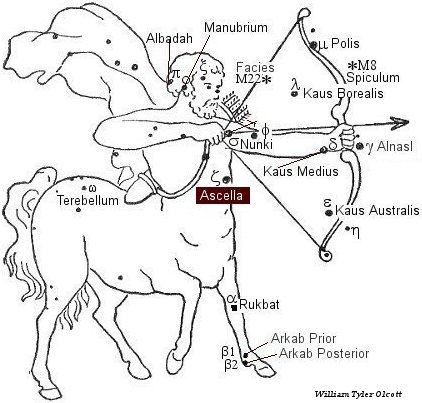 The Latin Almagest of 1515 gives this as Ascella, i.e. Axilla, the Armpit of the figure, still its location on the maps.

In ancient Arabia the two small groups of stars now marking the head and the vane of the Archer’s arrow were of much note as relics of still earlier asterisms, as well as a lunar station. The westernmost of these, — gamma (Alnasl), delta (Kaus Medius), epsilon (Kaus Australis), and eta — were Al Na’am al Warid, “the Going Ostriches” and the easternmost, — sigma (Nunki), zeta (Ascella), phi, chi, and tau, — Al Na’am al Sadirah, “the Returning Ostriches”, passing to and from the celestial river, the Milky Way, with the star lambda (Kaus Borealis) for their Keeper. Ideler thought it inexplicable that these non-drinking creatures should be found here in connection with water, and Al Jauhari compared the figures to an Overturned Chair, which these stars may represent. But Al Biruni said that Al Zajjaj had a word that signifies the Beam over the mouth of a well to which the pulleys are attached; while another authority said that pasturing Camels, or Cattle, were intended. There evidently is much uncertainty as to the true reading and signification of this title. All of the stars listed above were included in the Arabic 18th manzil, Al Na’am

Influences of the 18th Arabic Moon Mansion Al Na’am: Helps the taming of wild beasts, strengthening of prisons, destroys the wealth of societies and compels a man to come to a certain place.

With Moon transiting here: build, ask favors but do not marry. [Robson, p.73.]

Influences of the 18th Hindu Moon Mansion Purva Ashadha: A severe asterism belonging to the Brahmin caste and favorable for acts of disgrace, destruction, deceit, imprisonment, beating, burning and poison when containing the Moon. Those born on the lunar day will be truthful, cleanly, wealthy, fond of fruit and flowers and sea voyages. With Moon here at birth native will be conceited, proud, constant in friendship and will have an agreeable life. Rules thatched houses and the back. [Robson, p.83.]

The astrological influences of the star Ascella

Of the nature of Jupiter and Mercury. It gives good fortune and happiness. [Robson, p.141.]