The history of the star: Alnasl

Gamma (γ) Sagittarius, Alnasl, is a yellow star marking the head of the Archer’s Arrow, companion nebula to Spiculum 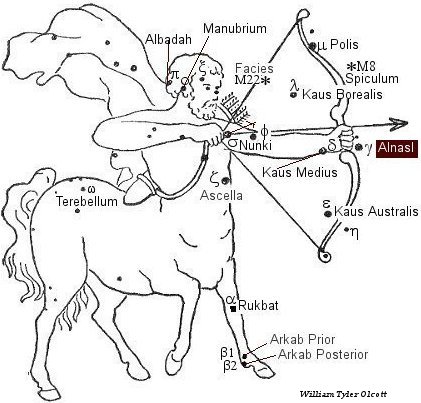 Al Nasl, “The Point”, or “The arrowhead”, is Al Tizini (Arabian astronomer, first half of 16th century)’s word designating this as marking the head of the Arrow; but the 17th century English orientalist Thomas Hyde cited Zujj al Nushshabah of similar meaning.

{p.358} The Borgian globe termed it Al Wazl, the Junction, indicating the spot where the arrow, bow, and hand of the Archer meet.

This star, with delta (δ Kaus Medius) and epsilon (ε Kaus Australis) and with beta (β) of the Telescope (Telescopium), was the sieu (Chinese Moon Mansion) Ki, but in the worship of China the three were Feng Shi, the General of Wind.

In ancient Arabia the two small groups of stars now marking the head and the vane of the Archer’s arrow were of much note as relics of still earlier asterisms, as well as a lunar station. The westernmost of these, — gamma (this star Alnasl), delta (Kaus Medius), epsilon (Kaus Australis), and eta — were Al Na’am al Warid, the Going Ostriches; and the easternmost, — sigma (Nunki), zeta (Ascella), phi, chi, and tau, — Al Na’am al Sadirah, the Returning Ostriches, passing to and from the celestial river, the Milky Way, with the star lambda (Kaus Borealis) for their Keeper

Delta (Kaus Medius), gamma (this star Alnasl) and epsilon (Kaus Australis), was the Akkadian Sin-nun-tu, or Si-nu-nu-tum, “the Swallow”.