The history of the star: Kaus Borealis 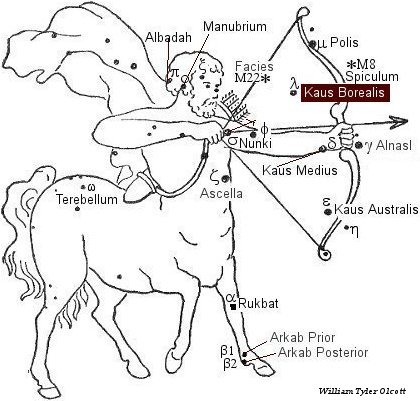 Lambda (λ) Sagittarius, Kaus Borealis, is a yellow star in the Bow of the Archer, the northern star.

Kaus Borealis, the Northern (part of the) Bow, was Al Tizini (Arabian astronomer, first half of 16th century)’s Rai al Na’aim, the Keeper of the Na’ams, the uncertainty as to the meaning of which has already been noticed; but the 13th century Persian astronomical writer Al Kazwini evidently understood by it Ostriches, for in his list it is, with the stars mu (μ Polis), Al Thalimain, plainly meaning these desert birds.

{p.359} With the same stars it may have been the Akkadian Anu-ni-tum, said to have been associated with the great goddess Istar

In ancient Arabia the two small groups of stars now marking the head and the vane of the Archer’s arrow were of much note as relics of still earlier asterisms, as well as a lunar station. The westernmost of these, — gamma (Alnasl), delta (Kaus Medius), epsilon (Kaus Australis), and eta — were Al Na’am al Warid, the Going Ostriches; and the easternmost, — sigma (Nunki), zeta (Ascella), phi, chi, and tau, — Al Na’am al Sadirah, the Returning Ostriches, passing to and from the celestial river, the Milky Way, with this star lambda (Kaus Borealis) and the star mu (Polis), as their Keeper; Ra’i al Na’aim, the “Keeper of the Na’ams”, or Al Thalimain, meaning desert birds.

“As for the Archer, when the foremost portion of his cloak rises, he will give birth to hearts renowned in war and will conduct the conqueror, celebrating great triumphs in the sight of all, to his country’s citadels. Such a one will build high walls (moenia from Latin murus) one moment and pull them down the next. But if Fortune favors them too generously with success, the mark of her envy is to be seen on their faces, for she works cruel havoc upon their features. So was it that a dread warrior paid for his victories at the Trebia, Cannae, and the Lake, even before the hour of his retreat, with such disfigurement.” [Translator’s note: *Hanibal who lost an eye (Livy 22.2.11: Sagittarius is one-eyed; see p.103] [Manilius, Astronomica, 1st century AD, book 4, p.267]

The astrological influences of the star Kaus Borealis

Promoters of idealistic and humane ideas, promoters of mental stimuli, enterprise and a sense of justice. [Fixed Stars and Their Interpretation, Elsbeth Ebertin, 1928, p.74.]

It conveys a sense of strength and flexibility combined and this often shows up in the chart of people who can put force behind their reasoning, yet be flexible. [The Living Stars, Dr. Eric Morse, p.94.]