The history of the star: Kaus Medius 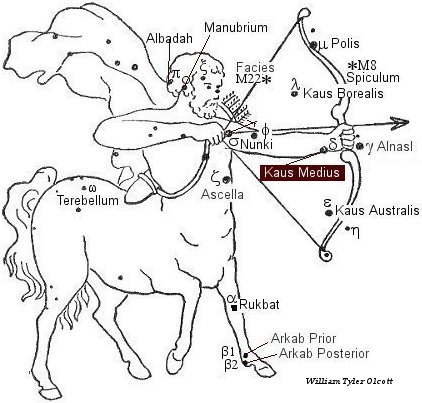 Delta (δ) Sagittarius, Kaus Medius, or Kaus Media, is a double star, 2.8 and 14.5, orange yellow and bluish in the middle of the Archer’s bow.

Kaus Meridionalis, or Media, is Arabic and Latin for the Middle of the Bow. It marked the junction of the two Ashadha [the 18th nakshatra or Hindu moon mansion Purva Ashadha, and the 19th nakshatra Uttara Ashadha].

In ancient Arabia the two small groups of stars now marking the head and the vane of the Archer’s arrow were of much note as relics of still earlier asterisms, as well as a lunar station. The westernmost of these, — gamma (Alnasl), delta (this star Kaus Medius), epsilon (Kaus Australis), and eta — were Al Na’am al Warid, the Going Ostriches; and the easternmost, — sigma (Nunki), zeta (Ascella), phi, chi, and tau, — Al Na’am al Sadirah, the Returning Ostriches, passing to and from the celestial river, the Milky Way, with the star lambda (Kaus Borealis) for their Keeper.

Influences of the 19th Hindu Moon Mansion Uttara Ashadha: A stable asterism belonging to the Kshattriya caste and favorable for coronations, expiatory ceremonies, planting of trees, sowing of seeds, building of towns, and matters of a permanent nature when containing the Moon. Those born on the lunar day will be honorable, handsome, happy, religious, fond of large animals and will be soldiers or wrestlers. With Moon here at birth native will be obedient, polite, popular, grateful and have many friends. Rules wash-houses and the hips. [Robson, p.83.]

“As for the Archer, when the foremost portion of his cloak rises, he will give birth to hearts renowned in war and will conduct the conqueror, celebrating great triumphs in the sight of all, to his country’s citadels. Such a one will build high walls (moenia from Latin murus) one moment and pull them down the next. But if Fortune favors them too generously with success, the mark of her envy is to be seen on their faces, for she works cruel havoc upon their features. So was it that a dread warrior paid for his victories at the Trebia, Cannae, and the Lake, even before the hour of his retreat, with such disfigurement.” [Translator’s note: *Hanibal who lost an eye (Livy 22.2.11: Sagittarius is one-eyed; see p.103] [Manilius, Astronomica, 1st century AD, book 4, p.267]