The history of the star: Albaldah 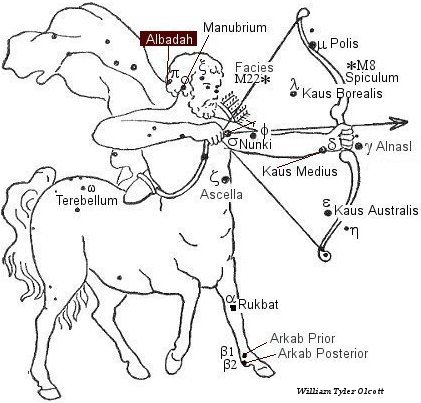 Pi (π) Sagittarius, Albaldah, is a 3rd magnitude star on the back of the head of the Archer, in an area of the sky that is comparatively untenanted except for this and other faint stars.

This was Al Tizini’s (Arabian astronomer, first half of 16th century) Al Baldah, from the 19th manzil (Arabic Moon Mansion), which it marked; Al Achsasi considering it as Al Na’ir, the Bright One, of that lunar station.

The Arabic 19th manzil lay in this vacant space from the upper part of the Sagittarius toward the horns of the Sea-Goat, and was known as Al Baldah, the "City", or "District", to which this star owes its name. Al Biruni described the 19th Manzil as "the head of Sagittarius and his two locks." He compared this 19th manzil to "the interstice between the two eyebrows which are not connected with each other," — a condition described by the word ‘Ablad, somewhat similar to the Baldah generally applied to this star. Al Na’ir, "the Bright One", of that lunar station was another name for it. [Allen Star Names p.355.