The history of the star: Tejat Posterior

from p.236 of Star Names, Richard Hinckley Allen, 1889.
[A scanned copy can be viewed on this webpage 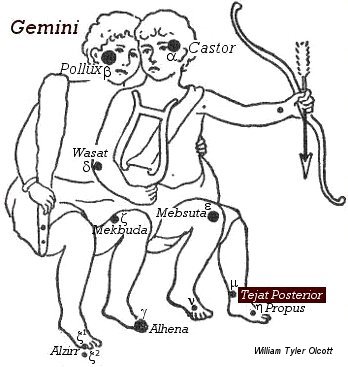 Mu (μ) Gemini, Tejat Posterior, is a double star, 3.2 and 11, crocus yellow and blue, in the right heel of the northern Twin, Castor, in the constellation of the Twins.

It occasionally has been known as Tejat posterior, and sometimes as Nuhatai, from the manzil (Arabic Moon Mansion) of that title of which it formed a part.

The Century Dictionary and Cyclopedia apply to it the Pish Pai seen for eta (η Propus), yet appropriate enough for this similarly situated star; but in Flamsteed’s edition of the 16th century Danish astronomer Tycho’s catalogue we distinctly read of it, dictaCalx, the Heel (Latin dictaCalx, the “Heel”, the rounded part of the heel).

This star marked the 9th ecliptic constellation of Babylonia as Arku-sha-pu-u-mash-mashu, the Back of the Mouth of the Twins.

{p.237} In China it was included with Castor and others in the sieu (Chinese Moon Mansion) Tsing

In Babylonia gamma (Alhena), eta (Propus), mu (this star Tejat Posterior), nu, and xi (Alzirr), all in the Milky Way, may have been the Babylonian lunar mansion Khigalla, the “Canal”, and the equivalent Persian Rakhvad, the Sogdian Ghathaf, and the Khorasmian Gawthaf (Star Names, p.234.).

Listed under Dirah “Seed” or “Branch” in Robson’s book, Fixed stars and Constellations; and adds; “Symbolically called the Abused or Beaten One”.  [Robson, p.163.]

Tejat Posterior, mu Gemini, was included in the Arabic 4th manzil, Al Han’ah, “The brand-mark”. Al Han’ah, the 4th manzil (Arabic Moon Mansion), comprised of; gamma (γ Alhena), mu (μ this star Tejat Posterior), nu (ν), eta (η Propus), and xi (ξ Alzirr), in the feet of the Twins. This word, Al Han’ah, usually translated a Brand, or Mark, on the right side of a camel’s, or horse’s, neck, was defined by the Persian astronomer Al Biruni (973-1048 A.D.) as Winding, as though the stars of this station were winding around each other, or curving from the central star; and they were Al Nuhatai, the dual form of Al Nuhat, a Camel’s Hump, itself a curved line. Some Arabic authority found in them, with chi (χ) and chi (χ) of Orion, the Bow with which the Hunter (Orion) is shooting at the Lion (Arabs had an enormous Lion, their early Asad, extending over a third of the heavens). [p.234 of Star Names

The astrological influences of the star Tejat Posterior

Listed under Dirah “Seed” or “Branch” in Robson’s book, Fixed stars and Constellations; “Symbolically called the Abused or Beaten One”.  [Robson, p.163.]

Of the nature of Mercury and Venus. It gives force, energy, power and protection. [Robson, p.163.]

The ability to express ideas in reasonable and acceptable ways which win, because of their manifest intelligence. Al Hena with Tegat Posterior and Propus (Tegat Prior) entered Cancer 1349, 1621 and 1755 AD respectively. Each of these dates, within a year or two, was significant in the rise of European thought and literature from the Renaissance onwards. [The Living Stars, Dr. Eric Morse, p.45.].