The history of the star: Alhena

from p.234 of Star Names, Richard Hinckley Allen, 1889.
[A scanned copy can be viewed on this webpage 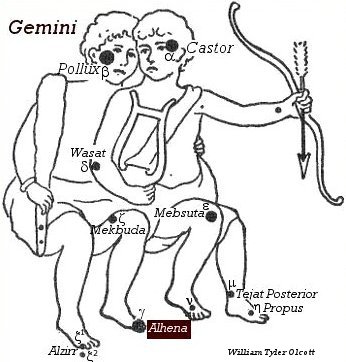 Gamma (γ) Gemini, Alhena, is a brilliant white star located on the left foot of the Twin Pollux

Almeisan, Almisan, Almeisam, and Almisam are from Al Maisan, the Proudly Marching One, its early Arabic name, which the 14th century Arabian lexicographer Al Firuzabadi, however, said was equally applicable to any bright star.

The 17th century Italian astronomer Riccioli called it Elhenaat, but Alhena is now generally given to it, from Al Han’ah, the 4th manzil (Arabic Moon Mansion), gamma (γ Alhena), mu (μ Tejat Posterior), nu (ν), eta (η Propus), and xi (ξ Alzirr), in the feet of the Twins. This word, usually translated a Brand, or Mark, on the right side of a camel’s, or horse’s, neck, was defined by the Persian astronomer Al Biruni (973-1048 A.D.) as Winding, as though the stars of this station were winding around each other, or curving from the central star; and they were Al Nuhatai, the dual form of Al Nuhat, a Camel’s Hump, itself a curved line. Some Arabic authority found in them, with chi (χ) and chi (χ) of Orion, the Bow with which the Hunter is shooting at the Lion (the Arab lion was a much larger lion than our Leo).

In Babylonia gamma (γ) marked the 10th ecliptic constellation, Mash-mashu-sha-Risu, the Twins of the Shepherd (?), and, with eta (η Propus), probably was Mas-tab-ba-tur-tur, the Little Twins; and, with eta (η Propus), mu (μ Tejat Posterior), nu (ν), and xi (ξ Alzirr), all in the Milky Way, may have been the Babylonian lunar mansion Khigalla, the Canal, and the equivalent Persian Rakhvad, the Sogdian Iranians Ghathaf, and the Khorasmian (east of Persia) Gawthaf

Robson wrote “A brilliant white star in the left foot of the Southern Twin, often called the Bright Foot of Gemini. From Al han’ah, a Brand or Mark burnt in. According to Bullinger (biblical writer of Witness of the Stars) it means “hurt, wounded or afflicted,” and it has been called “the wound in the tendon of Achilles”. [Robson, p126.]

The astrological influences of the star Alhena

According to Ptolemy it is of the nature of Mercury and Venus, but Alvidas gives Moon and Venus. It bestows imminence in art, but gives liability to accidents effecting the feet. [Robson, p.126.]

Artistic skills, especially with the written or spoken word and ability to negotiate a peaceful settlement in disputes. Al Hena with Tegat Posterior and Propus (Tegat Prior) entered Cancer 1349, 1621 and 1755 A.D. respectively. Each of these dates, within a year or two, was significant in the rise of European thought and literature, from the Renaissance onwards. [The Living Stars, Dr. Eric Morse, p.44.]

Alhena is supposed to have a Venus nature with a Jupiterian influence. This will confer a spiritual orientation on people thus effected and also give an artistic inclination, with interest in the sciences. [Fixed Stars and Their Interpretation, Elsbeth Ebertin, 1928, p.38.]

With Sun: Pride, love of ease, luxury and pleasure. There may be martial honors but danger of losing them. [Robson, p.127.]

With Saturn: Caution, reserve, studiousness, prominence in science or art, some domestic discord, sickness to the children, unexpected losses but possibility of wealth, ill-health at the end of life. [Robson, p.127.]

With Uranus: Timid, suspicious, selfish, economical over small things and extravagant in large ones, emotional, vacillating, unpractical and much influenced by habits, easily hypnotized, occult interests and secret psychic ability, afflicted with Cancerian ailments, two or more marriages, one very early and extremely unhappy especially if female, unfavorable for home and children. If a woman, good-looking and many friends but enemies among women. [Robson, p.127.]