The history of the star: Castor

from p.230 of Star Names, Richard Hinckley Allen, 1889.
[A scanned copy can be viewed on this webpage 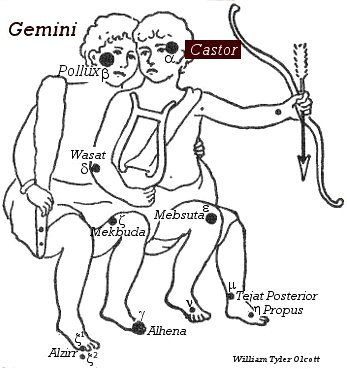 Alpha (α) Gemini, Castor, is a binary, 1.57 and 3.7, bright white and pale white, in the constellation of the Twins. Castor is the mortal Twin famous for his skill in taming and managing horses, and the Northern Twin (western). The immortal Twin is Pollux, the Boxer.

Together they were “the Two Gods of Sparta”, the Greek Dioscuri, and Didymi, Roman Gemini, also Amphion and Zethus, Antiope’s sons, who, as Homer wrote, were “Founders of Thebes, and men of mighty name”. In India they Acvini, the Ashwins, or “Horsemen”, they were also called Apollo (Castor) and Hercules (Pollux).

Castor, Ovid’s (43 B.C.-18?A.D.) Eques, the Horseman of the Twins, and the mortal one as being the son of Tyndarus, is the well-known name for this star, current for centuries; but in later Greek days it was Apollon, and Apollo with the astronomers even through Flamsteed’s time.

It will be remembered that till toward the Christian era this name for the god of day was the title of the planet Mercury when morning star, its rapid orbital movement and nearness to the sun preventing its earlier identification with the evening star, which was designated, as now, after the god of thieves (Mercury) and darkness. [Allen notes: As morning and evening star in Egypt Mercury was Set and Horus; in India, Buddha and Rauhinya; and in Greece Eroeis, the Lovely One, and Stilbon, the Sparkling One].

{p.231} The 17th century Dutch astronomer Caesius had the synonymous Phoebus, and also cited Theseus, but this should rather be applied to beta (β Pollux) as another title of the original Hercules [β Pollux had the appellation Hercules]. The 17th century German astronomer Bayer gave Rasalgeuze; and the Italian astronomer Riccioli (1598–1671), Alguezevel potiusElgiautzi, but these also better belong to beta (β Pollux).

The Babylonians used Castor to mark their 11th ecliptic constellation, Mash-mashu-Mahru, the Western One of the Twins; while with Pollux the two constituted Mas-tab-ba-gal-gal, the Great Twins. In Assyria they were Mas-mas and Tuamu, the Twins, although that country knew other twin stars here as well as elsewhere in the sky. As an object of veneration Castor was Tur-us-mal-maχ, the Son of the Supreme Temple; but in astrology, everywhere, it has been a portent of mischief and violence.

When the Arabians adopted the Greek figures they designated this star as Al Ras al Taum al Mukaddim, the Head of the Foremost Twin; but, according to Al Tizini (Arabian astronomer, first half of 16th century), the early and indigenous term was Al Awwal al Dhira‘, the First in the Paw or Forearm. Reference was made by this to the supposed figure of the enormous early Lion, the nomads’ Asad**

The two bright stars were the 5th manzil (Arabic Moon Mansion), Al Dhira‘, and the 5th nakshatra, Punarvarsu, the Two Good Again; Aditi, the sky goddess, mother of the Adityas, being the presiding divinity, and beta (β Pollux) marking the junction with Pushya, the next nakshatra (Hindu Moon Mansion).

As marking lunar stations, Brown thinks them the Akkadian Supa, Lustrous; the Coptic people of Egypt Pimafi, the Forearm; the Persian Taraha, the Sogdian Iranians Ghamb, and the Khorasmian (east of Persia) Jiray,— these last three titles signifying the {232} Two Stars. The 17th century English orientalist Thomas Hyde wrote that the Copts (who are now the Christians in Egypt) knew it as Pimai, or Pimaintekeon, the Forearm of the Nile; keon being for Gihon, a name for that river.

Castor is 7° north of the ecliptic, but, although literally heading the constellation, is now fainter than its companion (Pollux).

**[Arabs had an enormous Lion, their early Asad, extending over a third of the heavens, of which the stars Arcturus and Spica were the shin-bones; Regulus, the forehead; the heads of Gemini, one of the fore paws; Canis Minor, the other; and Corvus, the hind quarters. Many Arab starnames come from this tradition. Star Names p.97.], the Outstretched Forearm of which alpha (α Castor) and beta (β Pollux) marked as Al Dhira’ al Mabsutat. This extended still further over Gemini, the other, the Contracted one, Al Makbudah, running into Canis Minor. The rest of this monstrosity included Cancer, part of our Leo, Bootes, Virgo, and Corvus, as was mentioned by the 13th century Persian astronomical writer Al Kazwini, and commented on by the German astronomer Ideler (1766-1846), who sharply criticized mistakes in its construction. The Persian astronomer Al Biruni (973-1048 A.D.) also described this ancient figure, especially complaining of the many errors and much confusion in the Arab mind as to the nomenclature of the two stars, although he himself used titles for them generally applied only to Sirius and Procyon. The German astronomer Ideler (1766-1846) and Beigel attributed this exaggerated and incongruous formation to blunders of misunderstanding and transcription by early writers and copyists. Indeed, the former asserted that the whole was the creation of grammarians who knew nothing of the heavens, and arbitrarily misrepresented older star-names. [Allen, p.97.]

Influences of the 5th Arabic Moon Mansion Al Dhira: Favorable for gain and friendship and for lovers, and destroys magistracies. [Robson, p.71.]

Castor (α) and Pollux (β); alpha with beta Gemini; marked the 5th nakshatra in Hindu astrology; Punarvarsu; the Two Good Again; Aditi, the sky goddess, mother of the Adityas, being the presiding divinity, and beta (β Pollux) marking the junction with Pushya, the next nakshatra (Hindu Moon Mansion).

Influences of the 5th Hindu Moon Mansion Punarvarsu: Ruled by Jupiter. An asterism belonging to the Vaisya caste (business/merchants) and favorable for shaving. Those born on the lunar day will be truthful, generous, cleanly, respectable, handsome, famous and wealthy, fond of service, friendly with painters and sculptors, honorable merchants. With Moon here at birth native will be devout, quiet, happy, good-tempered, of wrong views, sickly, thirsty and pleased with trifles. Rules granaries and the nose. [Robson, p.77.]

“The arms to shoulders joined are accounted to the Twins” [Manilius, p.119]

The astrological influences of the star Castor

Notes: A binary star, bright white and pale white, situated on the head of the Northern Twin. It represents Castor, the mortal one of the twins, famous for his skill in taming and managing horses. Sometimes called Apollo, and symbolically named A Ruler yet to Come. [Robson, p.154.]

According to Ptolemy it is of the nature of Mercury; to Wilson, Simmonite and Pearce, of Mars, Venus and Saturn; and, to Alvidas, of the Moon, Mars and Uranus. It gives distinction, a keen intellect, success in law and many travels, fondness for horses, sudden fame and honor but often followed by loss of fortune and disgrace, sickness, trouble and great affliction. Its natives are said to be mischievous and prone to violence. [Robson, p.154.]

Associated with guile and duplicity. [Larousse Encyclopedia of Astrology].

Castor has specific associations with breaking an arm or leg and this may come from the Ptolemaic classification of Castor as a Mercury star, which is much associated with the limbs generally. Castor is also noted in natal astrology for proneness to mental breakdowns and neurotic distress. People with this star prominent and well aspected are exceptionally gifted intellectually. Where these geniuses often need help is in not letting their concern for others go ‘over the top’. [The Living Stars, Dr. Eric Morse, p.43.]

Castor is influenced by Mercury and has a blend of Jupiter in it. Linked with the Moon or Mercury, it has the effect of such people being blessed with a good nature and fine morals. It is also supposed to convey refined manners. A conjunction with the Sun or Mars will make for energetic characteristics and a certain tendency for satire and cynicism, depending on the position of Mercury or Mars in the chart as a whole. [Fixed Stars and Their Interpretation, Elsbeth Ebertin, 1928, p.40.]

With Venus: Strange and peculiar life, many extreme ups and downs, unfavorable for marriage. [Robson, p.155.]

With Mars: Evil disposition (used to be a term in astrology for homosexuality), much travel, aimless life, many ups and downs. [Robson, p.155.]

With Uranus: Conscientious, sensitive, impressionable, great psychic power entailing much public criticism, desirous of pleasing all, favorable for marriage and gain, few, if any, children but harmonious relations with them, loss in early life of the parent of opposite sex to native. [Robson, p.156.]

With Neptune: Emotional, romantic, fond of pleasure and amusement, connected with or notoriety through watery matters, occult interests, theatrical work and acting, especially in parts where no speaking is required, many removals and journeys, some domestic disharmony or separation, marries too young especially if female, good for gain but loss through friends and speculation, trouble through one or more of the children, death through some Cancer ailment. [Robson, p.156.]