The history of the star: Procyon

from p.133 of Star Names, Richard Hinckley Allen, 1889.
[A scanned copy can be viewed on this webpage 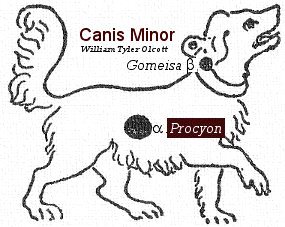 Alpha (α Canis Minor), Procyon, is a binary, 0.4, and 13, yellowish white and yellow star on the body of the Lesser Dog.

Its titles Procyon and Antecanis meant “Rising before Sirius“, “The Dog in Front”, “The Preceding Dog”.

Procyon, varied by Procion and Prochion,— Prokuon in the original Greek,— has been the name for this from the earliest Greek records, distinctly mentioned by the Greek astronomer Aratus, circa 270 B.C., and the second-century Greek astronomer Ptolemy, and so known by all the Latins, with the equivalent Antecanis

The 15th century Tartar astronomer Ulug Beg designated it as Al Shi’ra al Shamiyyah, shortened to Al Shamiyyah; the 14th century Greco-Persian astronomer Chrysococca transcribing this into his Low Greek Siaer Siame, and the Italian astronomer Riccioli (1598–1671) into Siair Siami; all of these agreeing with its occasional English title the Northern Sirius. The Alfonsine Tables of 1521 quote it as Aschere, AschemieelAlgomeysa; those of 1545, as prochion and Algomeyla

It thus has many of its constellation’s names; in fact, being the magna pars of it, probably itself bore them before the constellation (Canis Minor) was formed.

Euphratean scholars identify it with the Kakkab Paldara, Pallika, or Palura of the cylinders, the Star of the Crossing of the Water-dog, a title evidently given with some reference to the River of Heaven, the adjacent Milky Way; and Hommel says that it was the Kak-shisha which the majority of scholars apply to Sirius

Dupuis said that in Hindu fables it was Singe Hanuant; and Edkins that it, or Sirius, was the Persian Vanand [“the clan of the Vanands” immigrated from Persia and settled in Armenia and Bulgaria].

Chinese list gives it as Nan Ho, “the Southern River”, in which beta (β Gomeisa) and eta (η) were included.

In astrology, like its constellation, it portended wealth, fame, and good fortune. Procyon culminates on the 24th of February.

The astrological influences of the constellation Canis Minor

Legend: Canis Minor represents Maera, the hound of Icarius, who drowned himself on account of his grief at the death of his master (see Bootes). According to another account it was Helen’s dog who was lost in the Euripus. [Robson, p.35.]

Influences: Ptolemy gives no information as to the influence of the constellation Canis Minor itself but merely describes that of its chief star Procyon. By other authors however, it is said to cause frivolity and either love of dogs or danger of dog-bites. It is noteworthy that the ideas of water and drowning seem to be universally associated with this constellation. In addition to the Greek ideas embodied in the legends its Euphratean name was the Water Dog, and its Chinese equivalent Nan Ho, the Southern River, certain of the stars being called ShwuyWei, a Place of Water. Together with Canis Major this constellation is associated by the Kabalists with the Hebrew letter Tzaddi and the 18th Tarot Trump, “The Moon”. [Robson, 35.]

The astrological influences of the constellation Canis Minor given by Manilius:

This constellation was known to the Greeks as Prokuon and to Latins as Procyon (which is the name of the alpha star Procyon):

“Procyon rises at the moment when Cancer’s twenty-seventh degree ascends from the waves to the stars. He bestows upon those born under him not hunting, but its weapons. To rear keen scented whelps and to tell their class by their pedigree, their qualities by their place of origin; to produce nets and hunting-spears tipped with strong points, and pliant shafts with knots smoothed out and to manufacture and sell at a profit whatever the art of hunting is likely to require: these are the gifts Procyon will bestow” [Manilius, Astronomica, 1st century AD, book 5, 317.]

The astrological influences of the star Procyon

According to Ptolemy it is of the nature of Mercury and Mars; to Simmonite, of Venus and Mars, which is probably a misprint; and, to Alvidas, of the Moon, Jupiter and Uranus. It gives activity, violence, sudden and violent malevolence, sudden preferment by exertion, elevation ending in disaster, danger of dog bites and hydrophobia, and makes its natives petulant, saucy, giddy, weak-natured, timid, unfortunate, proud, easily angered, careless and violent. Two cases are on record of death or injury by dog bite in which Procyon and Sirius are involved. [Robson, p.191.]

Procyon is a very fortunate star; known to the Mesopotamians as ‘The Star of the Crossing of the Water – Dog’, as it lies near their River of Heaven, the Milky Way. Procyon foretold wealth and renown, and in all astrology has been much regarded, giving ‘Everlasting of the Right, and Good Effect’. Procyon has a Mars-Mercury nature and therefore makes people hasty, jealous, pig-headed. But it also confers will-power and ability to put thoughts and plans into action. According to tradition there is also a tendency to a hot temper and impudence. Rise and success are found with it, but fall from high position later, is indicated. Enterprises created in haste therefore do not last. People who “want to go through the wall with their head” only cause injury to themselves. Procyon gives drive and a good sharp mind. Linked with positive stellar bodies, success is made greater, but the native, in order to avoid a fiasco, has always to take care not to be imprudent. Especially dangerous is Procyon  configured with Mars and Pluto. With the Sun, a valiant demeanor is indicated. [Fixed Stars and Their Interpretation, Elsbeth Ebertin, 1928, p.43.]

In astrology, like its constellation, it portended wealth, fame, and good fortune. [Star Names, Their Lore and Meaning, Richard Hinckley Allen, 1889, p.134.

With Sun: Great help from friends, gifts and legacies if not afflicted, military preferment after great struggles and expense. If rising or culminating, kingly preferment. [Robson, p.192.]

With Moon: Occult interests, restless, never remains long in one place, quarrels with friends, partners and employers. If at the same time the Sun and Mars be with Deneb Adige (5 Pisces) or Vega (14 Capricorn), above the earth, death from the bite of a mad dog. [Robson, p.192.]

With Mercury: Occult interest, minor position of management under Government, trouble and scandal through opposite sex, favorable for health and gain. [Robson, p.192.]

With Venus: Many benefits from influential friends, associated with the Church, favorable for gain. [Robson, p.192.]

With Jupiter: Many journeys, trouble through relatives and the Church or law, help from friends. [Robson, p.192.]

With Saturn: Good judgment, high position of trust often in connection with land, may be adopted by aged couple from whom a good inheritance is obtained, benefits from elderly friends, good health, domestic harmony, marriage to one of higher station. [Robson, p.192.]

With Uranus: Broad-minded, liberal, minister or speaker on religious and philosophical subjects, not limited to any definite creed, many friends among the people, favorable for domestic matters. [Robson, p.192.]