The history of the star: Gomeisa

from p.134 of Star Names, Richard Hinckley Allen, 1889.
[A scanned copy can be viewed on this webpage 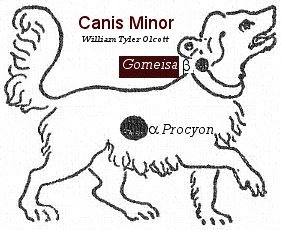 Beta (β) Canis Minor, Gomeisa, is a white star in the neck of the Lesser Dog.

Allen says Gomeisa or its variants was an Arabic name for the constellation of Canis Minor and says:

“We also find AlJummaiza, their Sycamine, although some say that this should be AlGhumaisa, from the Arabic story connected with Suhail (Canopus) and his marriage to Al Jauzah (Orion who in this story was a woman) and subsequent flight, followed by Al Shi’ra (Canis Major) below the Milky Way, where she remained. The other sister, Al Ghumaisa (this figure – Canis Minor), being left in tears in her accustomed place. Thus the Two Dog-stars/constellations were the Arabs’ Al Aliawat al Suhail, the Sisters of Canopus.” [p132. of Star Names].

AlJummaiza, also is Arabic for the Sycamine tree, a tree mentioned in the New Testament, thought to be a species of mulberry.

Gomeisa is from the Arabic Ghumaisa’ of the constellation, changed in the Alfonsine Tables to Algomeyla, and by Burritt’s Atlas of 1856 to Gomelza

Occasionally it has been Al Gamus, from another of the Arabians’ titles for the whole constellation of Canis Minor

Mirzam, or beta (β) Canis Major, was often combined by the Arabs with the this star beta (β) Canis Minor (Gomeisa), and these two beta stars together were titled “The Anouncers”, heralding the coming of Sirius, the biggest star in the sky, because they rose before Sirius in the night sky.

The Arabs utilized this star, Gomeisa, with Procyon, to mark the terminal points of their short Cubit, or Ell, Al Dhira, their long Cubit being the line between Castor and Pollux of Gemini. This same word appears in the title of one of the moon stations in that constellation.

The astrological influences of the constellation Canis Minor

Legend: Canis Minor represents Maera, the hound of Icarius, who drowned himself on account of his grief at the death of his master (see Bootes). According to another account it was Helen’s dog who was lost in the Euripus. [Robson, p.35.]

Influences: Ptolemy gives no information as to the influence of the constellation Canis Minor itself but merely describes that of its chief star Procyon. By other authors however, it is said to cause frivolity and either love of dogs or danger of dog-bites. It is noteworthy that the ideas of water and drowning seem to be universally associated with this constellation. In addition to the Greek ideas embodied in the legends its Euphratean name was the Water Dog, and its Chinese equivalent Nan Ho, the Southern River, certain of the stars being called ShwuyWei, a Place of Water. Together with Canis Major this constellation is associated by the Kabalists with the Hebrew letter Tzaddi and the 18th Tarot Trump, “The Moon”. [Robson, 35.]

The astrological influences of the constellation Canis Minor given by Manilius:

This constellation was known to the Greeks as Prokuon and to Latins as Procyon (which is the name of the alpha star Procyon):

“Procyon rises at the moment when Cancer’s twenty-seventh degree ascends from the waves to the stars. He bestows upon those born under him not hunting, but its weapons. To rear keen scented whelps and to tell their class by their pedigree, their qualities by their place of origin; to produce nets and hunting-spears tipped with strong points, and pliant shafts with knots smoothed out and to manufacture and sell at a profit whatever the art of hunting is likely to require: these are the gifts Procyon will bestow” [Manilius, Astronomica, 1st century AD, book 5, 317.]

Mirzam, or beta (β) Canis Major, was often combined by the Arabs with the this star beta (β) Canis Minor (Gomeisa), and these two beta stars together were titled “The Anouncers”, heralding the coming of Sirius, the biggest star in the sky, because they rose before Sirius in the night sky. In Arabia they were imagined as two dogs. One can imagine barking dogs announcing the arrival of visitors, or barking dogs bringing something to people’s attention: Many radio and TV announcers are influenced by either of these two stars (birth-charts from the AstroDataBank program).