The history of the star: Mirzam

from p.129 of Star Names, Richard Hinckley Allen, 1889.
[A scanned copy can be viewed on this webpage 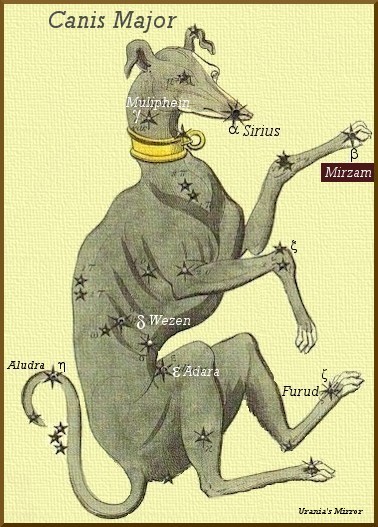 Beta (β), Mirzam, is a white 2nd magnitude star in Canis Major on the front left paw of the Greater Dog.

Murzim, generally but less correctly Mirzam, and occasionally Mirza, is from Al Murzim, the Announcer. This star Mirzam or beta (β) Canis Major, was often combined by the Arabs with the star beta (β) Canis Minor (Gomeisa), and these two beta stars together were titled “The Anouncers”, heralding the coming of Sirius, the biggest star in the sky, because they rose before Sirius in the night sky. In the plural they were Al Mirzamani, or as Al Mirzama al Shi’rayain, the two Sirian Announcers; Ideler’s idea of the applicability of this title being that this star announced the immediate rising of the still brighter Sirius

The German philologist Buttmann asserted that Mirzam also was Al Kalb, the Dog, running in front {p.130} of Sirius, but this must have been from early times in the Desert. In our maps it marks the right fore foot (actually the left) of the Dog, Canis Major

The Chinese called it Kuen She, the Soldiers’ Market.

This star Mirzam or beta (β) Canis Major, was often combined by the Arabs with the star beta (β) Canis Minor (Gomeisa), and these two beta stars together were titled “The Anouncers”, heralding the coming of Sirius, the biggest star in the sky, because they rose before Sirius in the night sky. In Arabia they were imagined as two dogs. One can imagine barking dogs announcing the arrival of visitors, or barking dogs bringing something to people’s attention: Many radio and TV announcers are influenced by either of these two stars (birth-charts from the AstroDataBank program).