The history of the star: Pollux

from p.233 of Star Names, Richard Hinckley Allen, 1889.
[A scanned copy can be viewed on this webpage 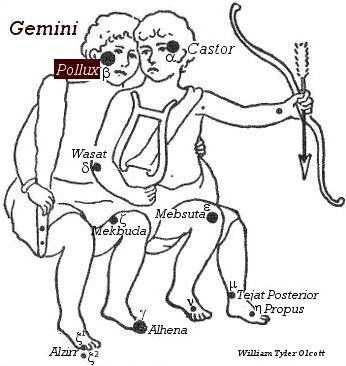 Beta (β) Gemini, Pollux, is a “yellowish” or “reddish,” star positioned on the head of the Southern Twin (eastern), “the immortal Twin”, in the constellation of Gemini. The other Twin, Castor, is the mortal one.

Together they were “the Two Gods of Sparta”, the Greek Dioscuri, and Didymi, Roman Gemini, also Amphion and Zethus, Antiope’s sons, who, as Homer wrote, were “Founders of Thebes, and men of mighty name”. In India they Acvini, the Ashwins, or “Horsemen”, they were also called Apollo (Castor) and Hercules (Pollux).

Pollux was formerly Polluces, the Greek Poludeukes; Ovid’s (43 B.C.-18 A.D.) Pugil, the Pugilist (or boxer) of the Two Brothers, and the immortal one as being son of Zeus. [Pollux was the “boxer”, and Castor was “famous for his skill in taming and managing horses”.]

As companion of Apollon (Castor), Pollux was (Greek) Hrakles and Hraklees, descending to Flamsteed’s day as Hercules, and degenerating, in early catalogues, into Abrachaleus, that the 17th century Dutch astronomer Caesius derived from the Arabic Ab, Father, and the Greek word; this being contracted by some to Aracaleus, by Dutch scholar Grotius (1583-1645) to Iracleus, by the 17th century English orientalist Thomas Hyde to Heraclus, and by the Italian astronomer Riccioli (1598–1671) to Garacles. All these are queer enough, as are some of Castor‘s titles; but what shall be said of the 17th century Italian astronomer Riccioli’s Elhakaac, that he attributes to the Arabs for alpha (α Castor) and beta (β Pollux) jointly, and Ketpholtsuman for beta (β Pollux) alone, and with no clue to their origin!

Pollux was the early Arabs’ Al Thani al Dhira, the Second in the Forearm; but the later termed it Al Ras al Taum al Mu’ahar, the Head of the Hindmost Twin, and Al Ras al Jauza‘, the Head of the Twin,— the Alfonsine TablesRasalgense and Rasalgeuze, that elsewhere is Rasalgauze. The 17th century Italian astronomer Riccioli cited Elhenaat, but this he also more properly gave to gamma (γ Alhena).

Beta (β Pollux) was the determinant of the 12th Babylonian ecliptic asterism Mash-mashu-arku, the Eastern One of the Twins; and individually Mu-sir-kes-da, the Yoke of the Inclosure.

It lies 12° north of the ecliptic, the zodiac’s boundary line running between it and Castor

It is one of the lunar stars made use of in navigation; and, in astrology, differed from its companion in portending eminence and renown.

The two lucidae (brightest stars of a constellation) probably bore the present title of the constellation long {235} antecedent to the latter’s formation; they certainly were the Mas-mas, or Twins, of the Assyrians, independent of the rest of the figure.

As a convenient measuring-rod it may be noted that alpha (α Castor) and beta (β Pollux) stand 4 ½° apart; and this recalls an early signification of their manzil (Arabic Moon Mansion) title, Al Dhira‘, the Arabs’ Ell measure of length that the stars were said to indicate. This naturally became the dual Al Dhira’an that also was used on the Desert for other similar pairs of stars.

Influences of the 5th Arabic Moon Mansion Al Dhira: Favorable for gain and friendship and for lovers, and destroys magistracies. [Robson, p.71.]

Castor (α) and Pollux (β); alpha with beta Gemini; marked the 5th nakshatra (Hindu Moon Mansion) in Hindu astrology; Punarvarsu; the Two Good Again; Aditi, the sky goddess, mother of the Adityas, being the presiding divinity, and beta (β Pollux) marking the junction with Pushya, the next nakshatra

Influences of the 5th Hindu Moon Mansion Punarvarsu: Ruled by Jupiter. An asterism belonging to the Vaisya caste (business/merchants) and favorable for shaving. Those born on the lunar day will be truthful, generous, cleanly, respectable, handsome, famous and wealthy, fond of service, friendly with painters and sculptors, honorable merchants. With Moon here at birth native will be devout, quiet, happy, good-tempered, of wrong views, sickly, thirsty and pleased with trifles. Rules granaries and the nose. [Robson, p.77.]

“The arms to shoulders joined are accounted to the Twins” [Manilius, p.119]

The astrological influences of the star Pollux

According to Ptolemy it is of the nature of Mars; and, to Alvidas, of the Moon, Mars and Uranus. It gives a subtle, crafty, spirited, brave, audacious, cruel and rash nature, a love of boxing, dignified malevolence, and is connected with poisons. [Robson, p.185-186.]

Pollux has a strong Martian nature and has the name ‘the wicked boy’ of the of the sibling Twins. According to its nature, this star is brutal and tyrannical, violent and cruel if in conjunction with the Sun, Moon, Ascendant, MC or with malefics. Just as Mars has its good sides if the energy it creates is channeled constructively, so Pollux should not always be considered as unhelpful. The star badly place could manifest that way, not by the native misusing his energy but by others deceiving him and fate playing him some cruel tricks. Helper if in peril on voyages at sea. [Fixed Stars and Their Interpretation, Elsbeth Ebertin, 1928, p.41.]

It can show aptitude for getting into quarrels, but it also denotes a power of penetration on the mental plane. [The Living Stars, Dr. Eric Morse, p.44.]

If culminating: Honor and preferment but danger of disgrace and ruin. [Robson, p.186.]

With Venus: Strong and irregulated passions, danger of seduction if female, loss through women, danger of poison. [Robson, p.187.]

With Mars: Violent, murderer or murdered, high position but final ruin, violent death by suffocation, drowning or assassination especially if the Moon be there also. [Robson, p.187.]

With Saturn: Bad temper, bitter, sarcastic, loss of arm or leg, loss of parents or trouble through step-parents, much help from a friend, lack of education, sudden death while following occupation through horses or large animals. [Robson, p.187.]

With Uranus: Occult interests, psychic ability, selfish, proud, vain of person and appearance, success in connection with the Government, companies or electrical matters, harmonious marriage in middle age, favorable for children, end of life not so favorable as middle. [Robson, p.187.]