The history of the star: Propus 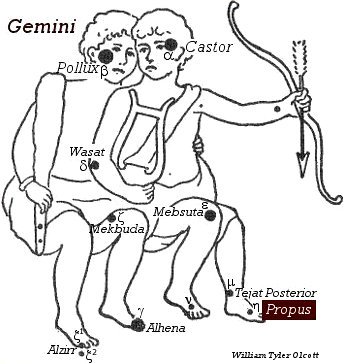 Eta (η) Gemini, Propus. The name, taken directly from the Greek, means “forward foot,” appropriate to its position as the foot of the western twin Castor. [].

Propus is from the Propous of Hipparchos (circa 160-120 B.C.) and the second-century Greek astronomer Ptolemy, indicating its position in front of Castor’s left foot [actually on the left foot here and in other drawings], and is its universal title, with the equivalent Praepes. The 17th century Italian astronomer Riccioli wrote it Propos, and Flamsteed gave both Propous and Propus; but the 16th century Danish astronomer Tycho had applied this last to the star FI. 1 among the extras of Gemini. This position of eta (η this star Propus) similarly made it the Pish Pai of the Persians.

Bassus and Hyginus said Tropus, Turn, referring to the apparent turning-point of the sun’s course at the summer solstice, which now is more precisely marked by the star gamma (γ Alhena) just eastward from eta (η this star Propus); and Flamsteed also had (Greek) Tropos.

Flammarion’s assertion that Hipparchos (circa 160-120 B.C.) knew eta (η this star Propus) as a distinct constellation, Propus, does not seem well founded.

Another name, Tejat prior, is from Al Tahayi, an anatomical term of Arabia by which it was known in early days; a name also applied to stars in the head of Orion. The Arabs included it with gamma (γ Alhena) and mu (μ Tejat Posterior) in their Nuhatai; the Chinese knew it as Yue, a Battle-ax; and in Babylonia it marked the 8th ecliptic constellation, Maru-sha-pu-u-mash-mashu, the Front of the Mouth of the Twins.

This star Propus portended lives of eminence to all born under its influence.

Near this star Sir William Herschel discovered the planet Uranus on the 13th of March, 1781.

This star Propus, eta (η) Gemini, was included in the Arabic 4th manzil, Al Han’ah, “The brand-mark”. Al Han’ah, the 4th manzil (Arabic Moon Mansion), comprised of; gamma (γ Alhena), mu (μ Tejat Posterior), nu (ν), eta (η this star Propus), and xi (ξ Alzirr), in the feet of the Twins. This word, Al Han’ah, usually translated a Brand, or Mark, on the right side of a camel’s, or horse’s, neck, was defined by the Persian astronomer Al Biruni (973-1048 A.D.) as Winding, as though the stars of this station were winding around each other, or curving from the central star; and they were Al Nuhatai, the dual form of Al Nuhat, a Camel’s Hump, itself a curved line. Some Arabic authority found in them, with chi (χ) and chi (χ) of Orion, the Bow with which the Hunter (Orion) is shooting at the Lion (Arabs had an enormous Lion, their early Asad, extending over a third of the heavens). [p.234 of Star Names

Influences of the 4th Arabic Moon Mansion Al Hanah: Favorable for hunting, besieging towns, and the revenge of princes, destroys harvests and fruits, and hinders the operation of the physician.

The astrological influences of the star Propus

The star Propus, Eta (η) Gemini, is erroneously listed as iota, ι, Gemini by Robson in Fixed Stars and Constellations in Astrology (iota, ι, is unnamed). Robson says Propus is a star positioned between the shoulders of the Twins, Castor and Pollux; but Propus is actually positioned on the Northern Twin’s (Castor) foot.

This star Propus portended lives of eminence to all born under its influence. [Star Names, Their Lore and Meaning, Richard Hinckley Allen, 1889, p.235].

The ability to express ideas in reasonable and acceptable ways which win because of their manifest intelligence. Al Hena with Tegat Posterior and this star Propus (Tegat Prior) entered Cancer 1349, 1621 and 1755 AD. respectively. Each of these dates, within a year or two, was significant in the rise of European thought and literature from the Renaissance onwards. [The Living Stars, Dr. Eric Morse, p.46-47.]