The history of the star: Alzirr

from p.237 of Star Names, Richard Hinckley Allen, 1889.
[A scanned copy can be viewed on this webpage 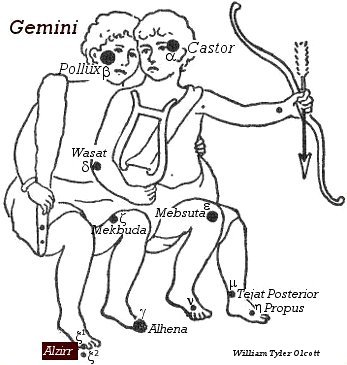 Xi (ξ) Gemini, Alzirr, is a 4th-magnitude star on the right foot of the Eastern Twin (Pollux) in the constellation of the Twins.

Alzirr, xi Gemini, was included in the Arabic 4th manzil, Al Han’ah, “The brand-mark”. Al Han’ah, the 4th manzil (Arabic Moon Mansion), comprised of; gamma (γ Alhena), mu (μ Tejat Posterior), nu (ν), eta (η Propus), and xi (ξ this star Alzirr), in the feet of the Twins. This word, Al Han’ah, usually translated a Brand, or Mark, on the right side of a camel’s, or horse’s, neck, was defined by the Persian astronomer Al Biruni (973-1048 A.D.) as Winding, as though the stars of this station were winding around each other, or curving from the central star; and they were Al Nuhatai, the dual form of Al Nuhat, a Camel’s Hump, itself a curved line. Some Arabic authority found in them, with chi (χ) and chi (χ) of Orion, the Bow with which the Hunter (Orion) is shooting at the Lion (Arabs had an enormous Lion, their early Asad, extending over a third of the heavens). [p.234 of Star Names