The history of the star: Rigel

from p.312 of Star Names, Richard Hinckley Allen, 1889.
[A scanned copy can be viewed on this webpage

Beta (β) Orion, Rigel, is a double star, the 7th brightest star in the sky, 0.3 and 8, both bluish white in the left foot of the Hunter (west foot). 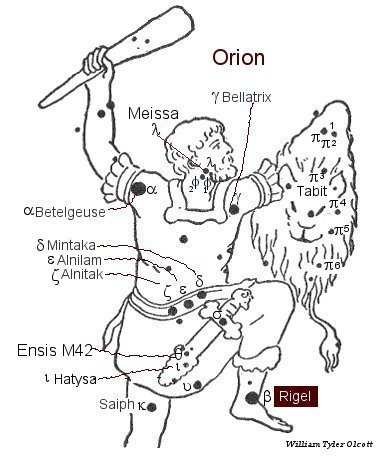 Algebar and Elgebar are seen in poetry for this star, but it universally is known as Rigel, from Rijl Jauzah al Yusra, the Left Leg of the Jauzah (Jauzah was the Arabic title for Orion), by which extended title the Arabians knew it after the word Jauzah had become a personal title; the modern name first appearing in the Alfonsine Tables of 1521. These say of it, in connection with Eridanus

The 14th century Greco-Persian astronomer Chrysococca termed it (Greek) Pous didumon, the Foot of — i.e. next to — the Twins (Gemini); and the 17th century German astronomer Bayer, the Hebrew Kesil, of the constellation.

“independent of the “nautis infestus Orion” character of the constellation, Rigel had one of his own; for it was to the astronomical rising of this “marinus aster” in March, that St. Marinus and St. Aster owe their births in the Romish calendar.”

He gave, however, no explanation of this, and these saints certainly are not familiar in any stellar connection. Possibly its “marine” character came from its location at the end of the River Eridanus, and from its being given in the various editions of the Syntaxis and in the Alfonsine Tables as common {p.313} to both constellations (Orion and Eridanus); although the supposed stormy character of the whole group in affecting navigation may have induced the epithet for Orion‘s greatest star (although figured as beta Rigel is a larger star than alpha; Betelgeuse).

Astrologers said that splendor and honors fell to the lot of those who were born under it.

In the Norsemen’s astronomy Rigel marked one of the great toes of Orwandil, the other toe having been broken off by the god Thor when frost-bitten, and thrown to the northern sky, where it became the little Alcor of the Greater Bear (Ursa Major).

Rigel might be the part of Orion that was stung by the Scorpion. Orion boasted that he would exterminate all the animals on Earth, and was punished for his brazenness by the Goddess of Earth, Gaia, who sent a giant scorpion and ordered it to sting Orion. As mighty as Orion was, after only a brief battle, the scorpion managed to deliver the hunter a deadly sting on the heel, and believed by some to be in the position of this star which is also said to be in the heel: “On the western heel of Orion, the Hunter, rests brilliant Rigel.”

The astrological influences of the star Rigel

According to Ptolemy and Lilly it is of the nature of Jupiter and Saturn, but later authors consider it favorable and similar to Jupiter and Mars. Alvidas likens it to Mercury Mars and Jupiter. It gives benevolence, honor, riches, happiness, glory, renown and inventive or mechanical ability. [Robson, p.197-198.]

If Rigel is conjunct with the Sun, Moon, MC or Ascendant, quick rise in life is promised on account of a strong, inherent will power, love of action, and a lucky hand in enterprise. A continuous battle to retain an acquired position has to be waged. This fight at the same time stimulates an increase in vigor. Even in spite of unhelpful aspects, success and reaching the set aim can be secured by this powerful concentration. If however the native is not cautious or has an attack of weakness, failure and disappointments, a fall from success will follow. Tradition regarding the influence of Rigel is quite contradictory, implying again that the cosmogram must be fully analyzed. After the first world war, at the time of the first transatlantic flights, Elsbeth Ebertin noted a connection of Rigel to the Sun and Moon, in charts of several world record pilots, leading to sudden difficulties in the carrying out of planned enterprises resulting in failures to reach the set target. [Fixed Stars and Their Interpretation, Elsbeth Ebertin, 1928, p.32.]

With Moon Much worry and disappointment, injuries to life and fortune, sickness, ill health or death to wife or mother. [Robson, p.198.]

With Mercury: Scientific, prominent position in connection with Mercurial matters or in science. [Robson, p.198.]

With Uranus: Scientific, romantic, interested in antiquities, fame through historical or geological discoveries, probably in an unexplored country, friendships formed in a peculiar way abroad, many adventures and narrow escapes, early love disappointment, favorable for marriage after 30 death through some trivial accident abroad. [Robson, p.198.]