The history of the star: Mintaka 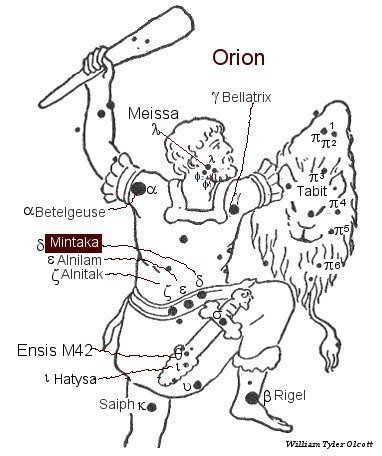 Delta (δ) Orion, Mintaka, is a double and slightly variable star, 2.4 and 6.8, brilliant white and pale violet, the west star in the Belt of the Hunter.

This star delta (δ Mintaka), along with epsilon (ε Alnilam) and zeta (ζ Alnitak) form the Belt of Orion the Hunter.

Mintaka, from Al Mintakah, the Belt, Burritt’s Atlas of 1856 has it Mintika

Mintaka at the west end is the first star of the belt stars seen to rise. Astrologers considered it of importance as portending good fortune.

It is about 23′ of arc south of the celestial equator.

These three stars are one of the most obvious features people see in the sky, and are formed in a row that appear to us of almost equal size and of equal distance from each other; Mintaka, the westernmost star in the belt, comes from the Arabic word for “belt” Alnilam, the center star in the belt, means “a belt of pearls” and Alnitak, the eastern-most star, means the girdle.

The astrological influences of the star Mintaka

Note: Robson gives influences for Mintaka and Alnilam separately and jointly under Cingula Orionis; the Belt of Orion.

According to Ptolemy Mintaka is of the nature of Saturn and Mercury; and to Alvidas, of Mercury, Saturn and Jupiter. It gives good fortune. [Robson, p.177.]

When rising, Alnilam, together with Alnitak and Mintaka, portend irreligious and treacherous individuals. These stars in medieval times were said to presage those who were “passionately devoted to hunting, but not noble hunting with falcon or bow”. Aspected by Saturn, the indications are for excellent fishermen, and in a female chart, any of these three stars rising or aspected by both Mars and a benefic portend a shrew. When setting and aspected by Mars any of these three stars indicate individuals who will incur all kinds of dangers. Mintaka alone portents good fortune as regards the growing of grain crops. [Fixed Stars and Judicial Astrology, George Noonan, 1990, p.44.]

Cingula Orionis with a malefic and the Moon at the same time with Markab (23 Pisces): death at human hands. [Robson, p.157.]

With Uranus: Selfish, studious, eccentric, difficult to get on with, losses through lawsuits and business, successful in middle age but poverty at end of life, favorable for domestic matters, death from consumption. [Robson, p.178.]