The history of the star: Betelgeuze

from p.310 of Star Names, Richard Hinckley Allen, 1889.
[A scanned copy can be viewed on this webpage 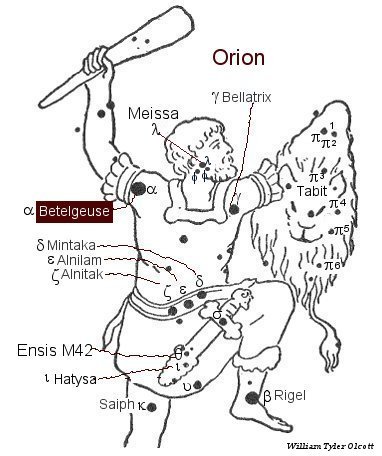 Alpha (α) Orion, Betelgeuze, is an orange or “ruddy” star marking the right armpit or shoulder of the Hunter, or Giant, and the 9th brightest star in the sky.

Bullinger, a biblical writer, called it “The Coming of the Branch”.

Betelgeuze is from Ib ţ al Jauzah, the Armpit of the Central One; degenerated (from transcriptions of Arabic texts) into Bed Elgueze, Beit Algueze, Bet El-geuze, Beteigeuze, etc., down to the present title, which itself also is written Betelgeuse, Betelguese, Betelgueze, Betelgeux, etc. The Alfonsine Tables had Beldengenze, and the Italian astronomer Riccioli (1598-1671), Bectelgeuze and Bedalgeuze

The star also was designated by various Arabian authors as Al Mankib, the Shoulder; Al Dhira, the Arm; and Al Yad al Yamna‘, the Right Hand, {p.311} —all of the Giant Orion; but English writer on globes John Chilmead (circa 1639) wrote “Ied Algeuze,— that is, Orion’s Hand,” quoted from Christmannus.

The title Mirzam, from Al Murzim, the Roarer, or perhaps the Announcer, originally used for gamma (γ Bellatrix), also is applied to this as heralding the rising of its companions. La Lande, borrowing the full name of that star for this, quoted it as Almerzamo nnagied

Sayce and Bosanquet identify alpha (α Betelgeuze) with the Euphratean Gula, other stars possibly being included under this title; and Brown says that Kakkab Sar, the Constellation of the King, or Ungal, refers to alpha (α Betelgeuze) with gamma (γ Bellatrix) and lambda (λ Meissa). We can see in this signification the origin of the astrologer’s idea that Betelgeuze portended fortune, martial honors, wealth, and other kingly attributes.

Alpha (α Betelgeuze) alone constituted the 4th nakshatra (Hindu Moon Mansion), Ardra, Moist, depicted as a Gem, with Rudra, the storm-god, for its presiding divinity, and so, perhaps, the origin of the long established stormy character of Orion. This lunar station, therefore, formed but a part of the 4th sieu (Chinese Moon Mansion), and differed entirely from the 4th manzil (Arabic Moon Mansion). Individually the star was the Sanskrit Bahu, Arm, probably from the Hindu conception of the whole figure as a running Stag, or Antelope, of which alpha (α Betelgeuze), beta (β Rigel), gamma (γ Bellatrix), and kappa (κ Saiph) marked the legs and feet, with alpha (α Betelgeuze) on the left forearm; the adjacent Sirius being the hunter Mrigavyadha.

Brown mentions its equivalent Persian title, Besn, the Arm, and the Coptic people of Egypt Klaria, an Armlet.

The 17th century German astronomer Bayer quoted (Greek) glenea from  the Greek astronomer Aratus, circa 270 B.C., but it is not in the original; and the 14th century Greco-Persian astronomer Chrysococca had (Greek) Omos didumon, the Shoulder of — i.e. next to—the Twins (Gemini).

Titles expressing ideas of war and carnage, astrology’s attributes of red stars were applied to it. ipsatenditadrapinamquaeappropinquatadterram. This tenditadrapinam, also used for the star Antares

Alpha (α Betelgeuze) alone constituted the 4th nakshatra (Hindu Moon Mansion), Ardra, Moist, depicted as a Gem, with Rudra, the storm-god, for its presiding divinity, and so, perhaps, the origin of the long established stormy character of Orion

Influences of the 4th Hindu Moon Mansion Ardra: Moist, so called because of its stormy influence. Symbol, a Gem. Regent, Rudra, the storm god. Ruled by the Dragon’s Head. A sharp asterism belonging to the butcher caste and favorable for punishment, torture, imprisonment, exorcism, mesmerism and separation or union when containing the Moon. Those born on the lunar day will deal in pod-grains, black magic, sorcery, exorcism, and will delight in murder, torture, lying, theft, cheating and adultery. With Moon here at birth native will be insincere, proud, ungrateful, cruel, sinful, deceitful and wicked. Rules temples and the eyes. [Robson, p.77.]

“Near neighbor to the Twins (Gemini), Orion may be seen stretching his arms over a vast expanse of sky and rising to the stars with no less huge a stride. A single light marks each of his shining shoulders, and three aslant trace the downward line of his sword: but three mark Orion’s head, which is imbedded in high heaven with his countenance remote. It is Orion who leads the constellations as they speed over the full circuit of heaven.” [p.35.]

“Orion will fashion alert minds and agile bodies, souls prompt to respond to duty’s call, and hearts which press on with unflagging energy in spite of every trial. A son of Orion’s will be worth a multitude and will seem to dwell in every quarter of the city; flying from door to door with the one word of morning greeting, he will enjoy the friendship of all.” [Astronomica, Manilius, 1st century AD. p.305.]

The astrological influences of the star Betelgeuze

According to Ptolemy it is of the nature of Mars and Mercury; and, to Alvidas, of Mercury, Saturn and Jupiter in good aspect. It gives martial honor, preferment and wealth. [Robson, p.147.]

War and carnage are presaged by Betelgeuse. The star is indicative of great fortune, martial honors and “kingly” attributes. When rising or culminating the native will be a superior athlete, being endowed with outstanding agility and speed of body. Variable moods and the mind always anxious with the immediate problems of the day. When setting these anxieties may lead to a disturbed mind. Honors and titles will be given the native during his lifetime if the star is rising at birth. If setting, these honors and titles will not come until after death.[Fixed Stars and Judicial Astrology, George Noonan, 1990, p.45.]

Said to be a harbinger of wealth. [Larousse Encyclopedia of astrology].

Placed in the angles, preferment, luck, success and everlasting fame are promised. On the Ascendant and in conjunction with Mars there will be danger of death by lightning, fire, explosions, firearms or similar things. Elsbeth Ebertin recorded that in June and July of 1927, when the Lunar Node was in conjunction with this fixed star, that groups of people died by lightning or were victims of explosions or assassination. [Fixed Stars and Their Interpretation, Elsbeth Ebertin, 1928, p.37.]

If culminating: Great military fortune, command, invention, ingenuity and helps in the perfection of arts and sciences. If at the same time with Sun, Moon or Jupiter, ample fortune and great honor. [Robson, p.147.]

With Sun: Interest in and ability for occult and mystical subjects, acute diseases, fevers, honor and preferment ending in final ruin. [Robson, p.147.]

With Mercury: Serious, studious, scientific and literary, fame through writings or engravings in metal, favorable for health but liable to accidents. [Robson, p.147.]

With Venus: Somewhat retiring and reserved, great ability as a maker of fine ornaments, favorable for gain, some sorrow connected with the family or marriage. [Robson, p.147.]

With Jupiter: Serious and studious mind, shrewd and profitable business dealings, great honor in the Church or law. [Robson, p.147.]

With Neptune: Ingenious, mechanical ability, may invent mechanical device, spiritualistic interests, some physical ailment or affliction or mental derangement, not good for gain but greatest success in partnership, favorable for marriage and children but disharmony with brothers and sisters, liable to some serious or fatal accident in middle age. [Robson, p.148.]