The history of the star: Meissa

from p.318 of Star Names, Richard Hinckley Allen, 1889.
[A scanned copy can be viewed on this webpage 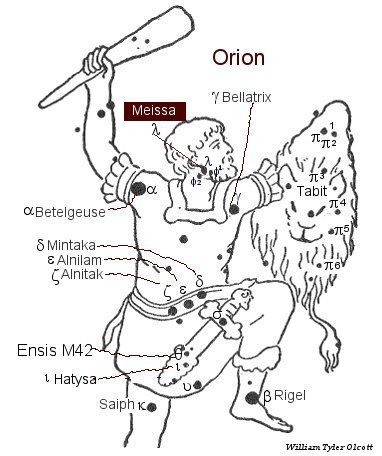 Orion’s body has many bright stars, but his head is marked with only three dim stars; lambda (Meissa), phi (φ), and phi² (φ); the reason Manilius explains is that his head “is imbedded in high heaven with his countenance remote.” Another translation gives:

“In his vast Head immerst in boundless spheres

“Three Stars less bright, but yet as great, he bears.

Al Maisan, the title of gamma Gemini (Alhena), by some error of the 14th century Arabian lexicographer Al Firuzabadi was applied to this star as Meissa, and is now common for it. The 10th century Persian astronomical writer Al Sufi called it Al Tahayi; but Al Ferghani (circa 950 A.D.), and Al Tizini (Arabian astronomer, first half of 16th century) knew it as Ras al Jauzah, the Head of the Jauzah, which it marks. [In early Arabic astronomy Orion was Al Jauzah, the term means walnut, and also seems to be used for a black sheep with a white spot on the middle of the body].

The original Arabic name, Al Hak’ah, a White Spot, was from the added faint light of the smaller phi (φ) and phi (φ) in the background, and has descended to us as Heka and Hika. These three stars were another of the Athafiyy of the Arabs; and everywhere in early astrology were thought, like all similar groups, to be of unfortunate influence in human affairs.

The three stars in the head of Orion: lambda (λ Meissa), phi (φ) and phi (φ) constituted the Euphratean lunar station Mas-tab-ba-tur-tur, the Little Twins, a title also found for gamma Gemini (γ Alhena) and eta Gemini (η Propus); and individually were important stars among the Babylonians, rising to them with the sun at the summer solstice.

The three stars in the head of Orion: lambda (λ Meissa), phi (φ) and phi (φ), with alpha (α Betelgeuse), and gamma (γ Bellatrix), in the two shoulders, were known as Kakkab Sar, the Constellation of the King.

In other lunar zodiacs the three stars in the head of Orion: lambda (λ Meissa), phi (φ) and phi (φ) were the Sogdian Iranian Marezana, and the Khorasmian (east of Persia) Ikhma, the Twins; the Persian Avecr, the Coronet; and the Coptic people of Egypt Klusos, Watery.

They were also the sieu (Chinese Moon Mansion) Tsee, or Tsuy He, the Beak, or Pouting Lips, anciently Tsok, which Reeves gave as Keo

The three stars in the head of Orion: lambda (λ Meissa), phi (φ) and phi (φ) constituted the nakshatra (Hindu Moon Mansion) Mriga çiras, or Mriga-çirsha, (Robson gives Mrigasiras, see Margashīrsha/Mrigashira ) the Head of the Stag,— Soma, the Moon, being its presiding divinity, and lambda (λ this star Meissa) the junction star towards Ardra, and its determinant. As to this lunar station  the 19th American philologist Professor Whitney’s very reasonably wrote:

It is not a little strange that the framers of the system should have chosen for marking the 3rd station this faint group, to the neglect of the brilliant and conspicuous pair beta (β) and zeta (ζ) Taurus (El Nath and Al Hecka), the tips of the Bull’s horns. There is hardly another case where we have so much reason to find fault with their selection.

But they were possibly influenced by recollection of the fact that the vernal equinox lay here 4500 B.C. In addition to the customary Hindu title, the German Sanskrit scholar Weber mentioned Andhaka, Blind, apparently from its dimness; Aryika, Honorable, or Worthy; and Invaka, of doubtful meaning, sometimes read Invala

In China these stars were Si ma ts’ien, the Head of the Tiger.

The 15th century Tartar astronomer Ulug Beg, as well as Nasr al Din, likened the group to the letter of the Persian alphabet that was similar in form to the Greek A. La Lande wrote of them:

Hipparchos (circa 160-120 B.C.) did not allude to them, but the second-century Greek astronomer Ptolemy called them “o nepheloeides“, the Nebulous One, for such is their appearance to the casual observer, and has been their designation in all early catalogues, even to Flamsteed’s in his in capite Orionis nebulosa

Influences of the 3rd Arabic Moon Mansion Al Hakah: Helps the return from a journey, the instruction of scholars, building, and gives health and goodwill. [Robson, p.70.]

With Moon transiting here: begin war but do not sow or undertake any good. [Robson, p.70.]

The three stars in the head of Orion: this star lambda (λ Meissa), phi (φ) and phi (φ) constituted the nakshatra (Hindu Moon Mansion) Mriga çiras, or Mriga-çirsha, (Robson gives Mrigasiras, see Margashīrsha/Mrigashira ) the Head of the Stag,— Soma, the Moon, being its presiding divinity, and lambda (λ this star Meissa) the junction star towards Ardra, and its determinant.

Influences of the 3rd Hindu Moon Mansion Mrigasiras: Ruled by Mars. A soft asterism belonging to the serving caste and favorable for friendship, married love, purchase and making of clothes and ornaments, music, and auspicious deeds when containing the Moon. Those born on the lunar day will deal in perfumes, flowers, ornaments, and animals, will be lascivious and good writers or painters. With Moon here at birth native will be timid, capricious, skilful, talkative, rich, fond of pleasure. Rules cots and the brows. [Robson, p.76.]