The history of the star: Bellatrix

Gamma (γ) Orion, Bellatrix, is a pale yellow star marking the left shoulder of the Hunter. 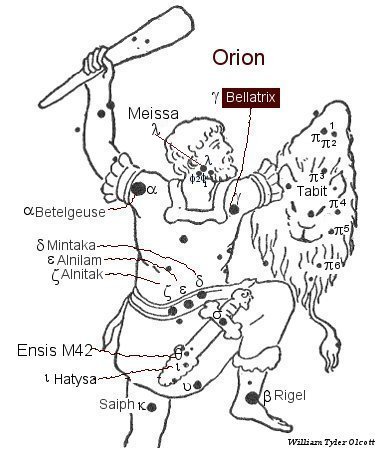 Bellatrix, the Female Warrior, the Amazon Star, is from the translation, rather freely made in the Alfonsine Tables, of its Arabic title, Al Najid, the Conqueror. The 13th century Persian astronomical writer Al Kazwini had this last, but the 15th century Tartar astronomer Ulug Beg said Al Murzim al Najid, the Roaring Conqueror, or, according to the 17th century English orientalist Thomas Hyde, the Conquering Lion heralding his presence by his roar, as if this star were announcing the immediate rising of the still more brilliant Rigel (β, the largest star in Orion), or of the whole constellation of Orion. This Murzim occasionally appears in our day as Mirzam, which is also applied to both of the stars beta (β) in the two Dogs (Canis Major and Canis Minor – Mirzam and Gomeisa) as heralds of Sirius and Procyon

The 10th century Persian astronomical writer Al Sufi had Al Ruzam, which the 17th century English orientalist Thomas Hyde said was another of the very many Arabic words for the lion, but Beigel thought it also a reference to the camel, another roarer. Still it is well to remember in this connection the German astronomer Ideler (1766-1846)’s remark that “etymology has full play with a word which has not traveled beyond astronomical language,”—a statement equally applicable to very many other star-names.

This star gamma (γ Bellatrix) marks the left shoulder of Orion, and naturally shared the Arabs’ Mankib, and the Hindus’ Bahu, titles of the star alpha (α Betelgeuse) on the right shoulder of Orion and forearm of the Stag.

In Amazon River myth Bellatrix is a Young Boy in a Canoe with an old man {p.314}, the star Betelgeuse, chasing the Peixie Boi, a dark spot in the sky near Orion

Alpha (Betelgeuse) with this star gamma (Bellatrix) and lambda (Meissa) were the Euphratean Kakkab Sar, the “Constellation of the King”, or Ungal – which portended fortune, martial honors, wealth, and other kingly attributes.

In astrology it was the natal star of all destined to great civil or military honors, and rendered all women born under its influence lucky and loquacious; or, as old Thomas Hood said, “women born under this constellation shall have mighty tongues.”

“Near neighbor to the Twins (Gemini), Orion may be seen stretching his arms over a vast expanse of sky and rising to the stars with no less huge a stride. A single light marks each of his shining shoulders, and three aslant trace the downward line of his sword: but three mark Orion’s head, which is imbedded in high heaven with his countenance remote. It is Orion who leads the constellations as they speed over the full circuit of heaven.” [p.35.]

The astrological influences of the star Bellatrix

According to Ptolemy Bellatrix is like Mars and Mercury; and, to Alvidas, Mercury and Mars in good aspect. It gives great civil or military honor but danger of sudden dishonor, renown, wealth, eminent friends and liability to accidents causing blindness and ruin. If prominent in a woman’s map it makes her loquacious and shrewish, and gives a high-pitched, hard and sharp voice. [Robson, p.145.]

If positive properties can be drawn out, will lead to advancement and success, but those who succeed always have to allow for being surrounded with envy and hatred. Quick decision making, thoughts and plans being realized with energy, courage, fighting spirit, strategic talents, ability to organize, discrimination. Reckless aggressiveness of a belligerent daredevil. [Fixed Stars and Their Interpretation, Elsbeth Ebertin, 1928, p.33.]

Associated with marriage for money and honors followed by reverses. [Larousse Encyclopedia of astrology].

Great courage, but a tendency to fight futile or lost causes if it is not well aspected. [The Living Stars, Dr. Eric Morse, p.134.]

With Mercury: Honor and preferment in military matters, favorable for friendship and social affairs. [Robson, p.146.]

With Venus: Much suffering through love affairs owing to unrestrained feelings. [Robson, p.146.]

With Jupiter: Philosophical and religious mind, hypocrisy, may be fanatic, legal prominence, and great honor but danger of slander. [Robson, p.146.]

With Saturn: Secluded and studious life, reserved, thoughtful owing to lack of interest, poverty at end of life, often single but if married the partner may die young, no children. [Robson, p.146.]

With Uranus: Mental disturbance, much activity, occult or unpractical interests, repeatedly suffers through the same mistakes, disharmony with relatives and neighbors, successful in the occupation of making peculiar machinery but little financial gain; unfavorable for domestic matters, many minor accidents. [Robson, p.146.]