The history of the star: Alnilam 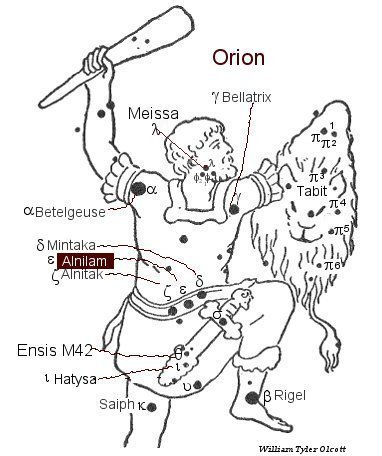 Alnilam, Anilam, Ainilam, and Alnihan are from Al Nitham, or Al Nathm, the String of Pearls, or, as British physicist Robert Recorde (1500-1558) said, the Bullions set in the middle of Orion’s Belt.

It portended fleeting public honors to those born under its influence.

One of the most obvious features people see in the sky is the three stars that form the “belt” across the middle of Orion; three stars in a row that appear to us of almost equal size and of equal distance from each other; Mintaka, the westernmost star in the belt, comes from the Arabic word for “belt” Alnilam, this center star in the belt, means “a belt of pearls” and Alnitak, the eastern-most star, means the girdle.

The astrological influences of the star Alnilam

According to Ptolemy it is of the nature of Jupiter and Saturn; and to Alvidas of Mercury and Saturn. It gives fleeting public honors. [Robson, p.128.]

The star Alnilam portends public honors to all those born under its influence. It is also said to indicate a good nut crop. When rising, Alnilam. together with Alnitak and Mintaka, portend irreligious and treacherous individuals. These stars in medieval times were said to presage those who were “passionately devoted to hunting, but not noble hunting with falcon or bow”. Aspected by Saturn, the indications are for excellent fishermen, and in a female chart, any of these three stars rising or aspected by both Mars and a benefic portend a shrew. When setting and aspected by Mars any of these three stars indicate individuals who will incur all kinds of dangers. [Fixed Stars and Judicial Astrology, George Noonan, 1990, p.44.]

Cingula Orionis with a malefic and the Moon at the same time with Markab (23 Pisces): death at human hands. [Robson, p.157.]

Alnilam with the Moon: Many sudden and unexpected losses and reverses, much help from friends, ill health of family. [Robson, p.129.]

With Jupiter: Legal or Church preferment but danger of disgrace, loss by speculation, trouble through relatives and foreign affairs. [Robson, p.129.]

With Uranus: Scientific ability, critical, enthusiastic, too many interests, may practice medicine or invent new surgical appliances but reaps no gain from them, many troubles and annoyances, disharmony with brothers and sisters who may cheat native out of inheritance, loss through law and in business, several marriages, enmity between native and partner’s relatives, unfavorable for children, sudden death in middle age while travelling, leaving affairs involved in litigation. [Robson, p.129.]

With Neptune: Honest, outspoken, hasty in speech, rash and impulsive, offends others through irreligious speech, business and mercantile pursuits or engaged in science, may be head of learned institution or connected with large companies, fond of speculation, sports and the water, quick and level headed in emergencies, many friends but loss through some, danger of accidents, domestic harmony, dies before old age. [Robson, p.129.]