The history of the star: Alcor 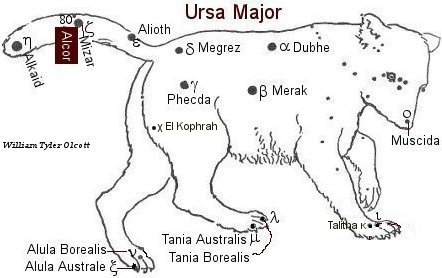 Alcor is the naked-eye companion of Mizar, and, inconspicuous though Alcor may be, has been famous in astronomical folklore.

This title, Alcor, and that of the star epsilon (ε, Alioth), may be from the same source, for the English astronomer Smyth (1788-1865) wrote of it:

“They are wrong who pronounce the name to be an Arabian word importing sharp-sightedness: it is a supposed corruption of aljaun, a courser, incorrectly written aljat, whence probably the Alioth of the Alfonsine Tables came in, and was assigned to epsilon (ε Alioth) Ursa Major, the “thill-horse” of Charles’s Wain. This little fellow was also familiarly termed Suha [the Forgotten, Lost, or Neglected One, because noticeable only by a sharp eye], and implored to guard its viewers against scorpions and snakes, and was the theme of a world of wit in the shape of saws:”

“The Arabs in the desert regarded it as a test of penetrating vision; and they were accustomed to oppose “Suhel” to “Suha” (Canopus to Alcor) as occupying respectively the highest and lowest posts in the celestial hierarchy. So that Vidit Alcor, at non lunam plenam, came to be a proverbial description of one keenly alive to trifles, but dull of apprehension for broad facts.”

Al Sahja was the rhythmical form of the usual Suha; and it appears as Al “Khawwar,” the Faint One, in an interesting list of Arabic star-names, published in Popular Astronomy for January, 1895, by Professor Robert H. West, of the Syrian Protestant College at Beirut.

The 14th century Arabian lexicographer Al Firuzabadi called it Our Riddle, and Al Sadak, the Test,—correctly Saidak, True; while the 13th century Persian astronomical writer Al Kazwini said that “people tested their eyesight by this star.” Humboldt wrote of it as being seen with difficulty, and Arago similarly alluded to it; but some now consider it brighter than formerly {p.446} and no longer the difficult object that it was, even in the clear sky of the Desert; or as having increased in angular distance from Mizar

Although the statement has been made that Alcor was not known to the Greeks, there is an old story that it was the Lost Pleiad Electra, which had wandered here from her companions and became Alopex, the Fox; a Latin title was Eques Stellula, the Little Starry Horseman; Eques, the Cavalier, is from the 17th century German astronomer Bayer; while the Horse and his Rider, and, popularly, in England, Jack on the Middle Horse, are well known, Mizar being the horse. The Persian astronomer Al Biruni (973-1048 A.D.) mentioned its importance in the family life of the Arabs on the 18th day of the Syrian month Adar, the March equinox; and a modern story of that same people makes it the infant of the walidan of the three Banat.

In North Germany Alkor, as there written, has been der Hinde, the Hind, or Farm Hand; in Lower Germany, Dumke; and in Holstein, Hans Dumken, Hans the Thumbkin,— the legend being that Hans, a wagoner, having given the Savior a lift when weary, was offered the kingdom of heaven for a reward; but as he said that he would rather drive from east to west through all eternity, his wish was granted, and here he sits on the highest of the horses of his heavenly team. A variant version placed Hans here for neglect in the service of his master Christ; and the Hungarians call the star Gontzol, with a somewhat similar tale. Another Teutonic story was that their giant Orwandil (Anglo-Saxon Earendel), our Orion, having frozen one of his big toes, the god Thor broke it off and threw it at the middle horse of the Wagon, where it still remains.

In China it was Foo Sing, a Supporting Star.

In Hindu mythology the seven stars of Ursa Major, the seven Richis or Seven Wise Men, were wedded to the seven sisters of the Pleiades. After rumors of their infidelity the Richis banished their wives. Only Arundhati (or Arundha), an exemplary wife remained with her husband, Sage Vashishta as the star Alcor; Vashishta is Mizar. In the course of Hindu marriage rituals, both the bride and groom are taken outside the marriage mandap and shown the Star Alcor, better known as Arundhati Nakshatram. This ritual symbolizes the urge of the newly weds to remain true to each other. And Alcor is pointed out as a paradigm of marital virtue to the bride. (, ).

In an Arabic story this star, Alcor, was the little infant in the arms of one of the “Mourners”. The constellation of the Great Bear (Ursa Major) was seen as a funeral procession, around a bier or coffin. The bier was marked by the Plough or Big Dipper stars on the body of the Bear – Merak (beta), Dubhe (alpha), Phecda (gamma) and Megrez (delta). The coffin was followed by “Mourners” the three big stars on the tail of the Great Bear; epsilon (Alioth), zeta (Mizar), and eta (Alkaid). These mourners, the children of Al Na’ash, who was murdered by Al Jadi, the pole-star (Polaris), are still nightly surrounding him in their thirst for vengeance, the walidan among the daughters — the star Mizar — holding in her arms her new-born infant, the little Alcor. [Star Names, p.433.]

In the Norse astronomy Rigel marked one of the great toes of Orwandil (Anglo-Saxon Earendel), the other toe having been broken off by the god Thor when frost-bitten, and thrown to the northern sky, where it became the little Alcor. [Star Names, p.313.]