The history of the star: Megrez 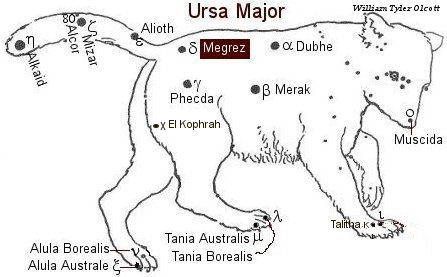 Megrez is from Al Maghrez, the Root of the Tail of Ursa Major [Magrez may be Arabic for “Buttocks”?]

In China it was Kwan, and Tien Kuen, Heavenly Authority.

With the Hindus it may have been Atri (born from brahma’s eyes), one of their Seven Rishis, and the VishnuDharma said that it ruled the other stars of the Bear [identifying Kratu with the star α Dubhe; Pulaha with β Merak; Pulastya with γ Phecda; Atri with δ Megrez; Angiras ε Alioth; Vasishtha with ζ Mizar; Bhrigu with η Alkaid. []. According to the Puranic stories, Brahma went into deep meditation for several thousands of years, at the termination of which a drop of water fell from his eyes which took the form of the sage, Atri. Soma, or the Moon, was born from this sage and his wife Anasuya []].

Delta (δ Ursa Major), Megrez, is 10° distant from alpha (α Dubhe); 4½° from gamma (γ Phecda); 5½° from epsilon (ε Alioth); and 32° from the pole, directly opposite beta (β) Cassiopeia (Caph), and almost on the equinoctial colure. Alpha (α Dubhe), beta (β Merak), gamma (γ Phecda), and delta (δ this star Megrez) form the bowl of the Dipper, the body of the Bear, and the frames of the Bier, Plough, and Wain, but occupy a space of less than 1/4 of the whole constellation. 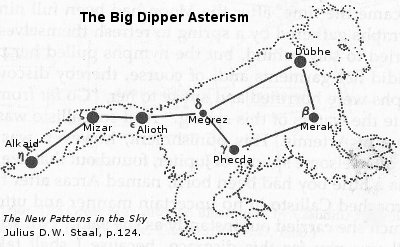 Delta (δ Ursa Major), Megrez, is one of the “The Plough”, also called “The Big Dipper” stars, an asterism on the back of the Bear, outlined by the stars; Merak (beta), Dubhe (alpha), Phecda (gamma) and this star Megrez (delta) on the body of the Bear, along with the three star of the tail; epsilon (Alioth), zeta (Mizar), and eta (Alkaid). The asterism was also seen as a Dipper or Ladle with the three stars in the tail forming the handle. In early Arabic astronomy the four plough stars on the body of the bear constituted the coffin or bier surrounded by mourners (the three stars in the tail) of Al Na’ash, who was murdered by Al Jadi, the pole-star (Polaris), and this constellation was seen as a funeral procession, attributing this title to the slow and solemn motion of the figure around the pole. The Big Dipper has been seen by various cultures as a plough, an ox cart, a wagon, it was known as Charlie’s Wain in northern Europe. To the Hindus the four stars of the plough and the three stars in the tail was Sapta Rishi “The seven Wise Men.” These seven stars (septentriones, from the phrase septem triones, meaning “seven plough oxen”) are the origin of the Latin word septentriones meaning “north”.