The history of the star: Nodus 1 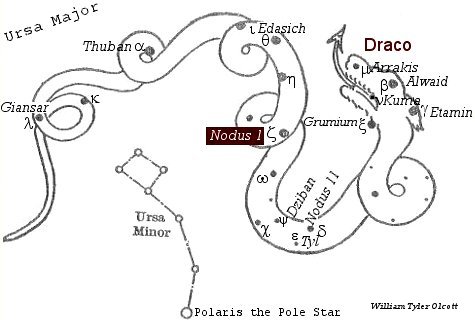 The Arabs called it Al Dhi’bah, that we have also seen for alpha (α Thuban).

The Chinese knew it as Shang Pih, the Higher Minister.

Half-way between it and delta (δ Nodus 11), within 7′ of the planetary nebula N.G.C. (New Galaxy Catalog) 6543, is the north pole of the ecliptic; the south pole being in the head of Dorado. Denning considers zeta (ζ this star Nodus 1) the radiant point of the meteor streams of the 19th of January and of the 28th of March.

This star zeta (ζ Nodus 1) along with eta (unnamed), together were Al Dhubain, the Duo Lupi of the Arabs, “the Two Hyaenas” or “Wolves”, lying in wait for the Camel’s Foal, the little star Al Ruba (?), protected by the Mother Camels, the larger stars in Draco‘s head.

In the Arabic theme for this constellation the stars beta (Alwaid), gamma (Etamin), nu (Kuma) and xi (Grumium) in the Head of the Dragon represent four mother camels protecting a baby camel from the attack of two hyenas (eta and this star zeta Draconis). The nomads camp located nearby (the three unnamed stars: upsilon, tau, and sigma).

They (zeta ζ and eta η) also were Al ‘Auhakan, “the Two Black Bulls”, or “Ravens”, the Arabic word signifying either of these creatures.