The history of the star: Kuma 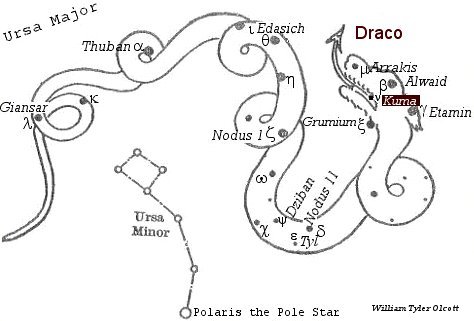 Nu (ν) Draco, Kuma, is a star in the mouth of the Dragon.

Some have translated Kuma to mean “At Last”. It was one of Al’Awa’id, “the Mother Camels” which was known as the Quinque Dromedarii, already mentioned in connection with beta (β Alwaid), gamma (γ Etamin), mu (μ Arrakis) and xi (ξ Grumium). In the early Arabic theme for this constellation these stars in the Head of the Dragon represent four mother camels protecting a baby camel from the attack of two hyenas (eta η and zeta ζ Nodus 1). The nomads camp located nearby (the three unnamed stars in the neck of the Dragon: upsilon, tau, and sigma).