The history of the star: Arrakis 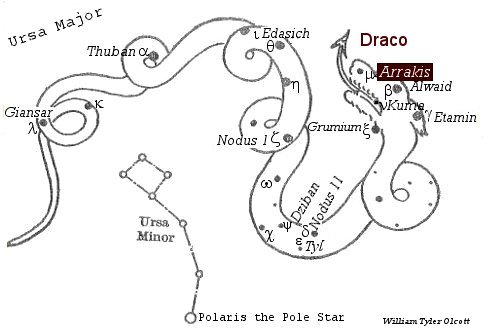 Mu (μ) Draco, Arrakis, “the Dancer”, is a binary star, 5 and 5.1, brilliant white and pale white marking the nose or tongue of the Dragon.

Al Rakis, from the 15th century Tartar astronomer Ulug Beg’s catalogue, turned into Arrakis and Errakis, generally has been thought to signify the Dancer, perhaps to the neighboring Lute-player, the star beta (β Alwaid); but here probably the Trotting Camel, one of the group of those animals located in this spot. The German astronomer Ideler (1766-1846) added for it Al Rafad, the Camel Pasturing Freely, that the original, differently pointed, may mean. The little star in the centre of the group of Camels, beta (β Alwaid), gamma (γ Etamin), mu (μ this star Arrakis), nu (ν Kuma), and xi (ξ Grumium), is named Al Ruba‘ on the Borgian globe, although almost invisible; but did not appear in the catalogues till Giuseppe Piazzi, Italian astronomer (1746-1826)’s time, except with Julius Schiller in his Coelum Stellatum Christianum of 1627, where it is the 37th star in his constellation of the Holy Innocents.

Assemani mentioned mu (μ this star Arrakis) as Al Ca’ab, the Little Shield or Salver, but gave no reason for this, and its inappropriateness renders the claim very doubtful.

In modern drawings it marks the nose or tongue of Draco.