The history of the star: Alwaid

from p.207 of Star Names, Richard Hinckley Allen, 1889.
[A scanned copy can be viewed on this webpage 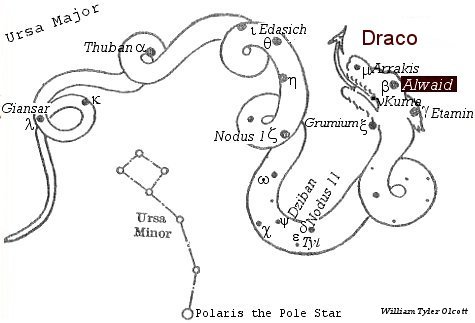 Beta (β) Draco, Alwaid, is a yellow binary star situated in the head of the Dragon, and anciently called; “The Nebulous Star in the Dragon’s Eye”.

In early Arab astronomy it was one of Al’ Awai’d, the Mother Camels, gamma (γ Etamin), mu (μ Arrakis), nu (ν Kuma), and xi (ξ Grumium) completing the figure, which was later known as the Quinque Dromedarii. From the Arabic word comes another modern name, Alwaid, unless it may be from a different conception of the group as Al ‘Awwad, the Lute-player. Still other Desert titles were Al Rakis, the Dancer, or Trotting Camel, now given to mu (μ Arrakis); and it formed part of Al Salib al Waki‘, the Falling Cross, beta (β this star Alwaid) and xi (ξ Grumium) forming the perpendicular, gamma (γ Etamin), mu (μ Arrakis), and nu (ν Kuma) the transverse; and thus designated as if slanting away from the observer to account for the paucity of stars in the upright.

Asuia, current in the Middle Ages and since, was from Al Shuja, and often has been written Asvia, the letter being mistakenly considered the early nu (ν). The companion, 4″ away, at a position angle of 13°.4, was discovered by Burnham.

Beta (β this star Alwaid) and gamma (γ Etamin), 4° apart, near the solstitial colure, have been known as the Dragon’s Eyes, incorrect now, although the English astronomer Proctor (1834-1888) thought them so located in the original figuring of a front view of Draco. Modern drawings place them on the top of the head.

In China they were Tien Kae

Among Arabian astronomers Al Tinnin and Al Thu’ban, on the Borgian globe, inscribed over beta and gamma, are the words Alghavil Altannin in Assemani’s transcription, the “Poisonous Dragon” in his translation, assumed by him as referring to the whole constellation. That there was some foundation for this may be inferred from the traditional belief of early astrologers that when a comet was here poison was scattered over the world. [Allen, Star Names, p.205.

In the Arabic it is still called Al Waid, which means, “who is to be destroyed” [BullingerWitness of the Stars]. Interestingly Pluto was conjuncting this star on 9/11/2001 and afterwards when it was decided to go after Bin Laden. Another interesting thing is Bin Laden’s name: Ladon is mythologically identified with the constellation Draco, the DragonLadon is seen as guarding the constellation Ursa Minor that contains the pole star Polaris. Read about Ladon on the Draco constellation page.

The astrological influences of the star Alwaid

Of the nature of Saturn and Mars. It gives loss of property, violence, criminal inclinations and accidents. [Robson, p.194, under the name Rastaban].

With Moon: Blindness, wounds, quarrels, bruises, stabs, blows (operations can be substituted nowadays) and kicks from horses. [Robson, p.194, under the name Rastaban].