The history of the star: Grumium 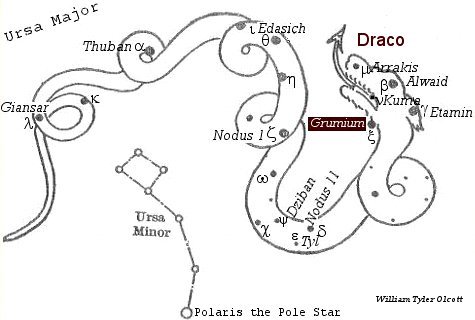 Xi (ξ) Draco, Grumium, is a yellow star in the jaw of the Dragon.

It was one of the Herd of Camels; in the Arabic theme for this constellation; the stars beta (Alwaid), gamma (Etamin), nu (Kuma) and xi (this star Grumium) in the Head of the Dragon represent four mother camels protecting a baby camel from the attack of two hyenas (eta and zeta (Nodus 1). The nomads camp located nearby (the three unnamed stars in the neck of the Dragon: upsilon, tau, and sigma).

Its modern individual name, Grumium, is the barbarism found for it in the Almagest of 1515, an equivalent of (Greek) genus used by the second-century Greek astronomer Ptolemy for the Dragon’s under jaw. The word is now seen in the Italian grugno and the French groin

{p.212} The English astronomer Proctor (1834-1888) thought that it marked Draco‘s darted tongue in the earliest representations of the figure,— unless iota (ι) Hercules were such star; while Denning considers it the radiant point of the meteor stream seen about the 29th of May,— the Draconids