The history of the star: Etamin

from p.207 of Star Names, Richard Hinckley Allen, 1889.
[A scanned copy can be viewed on this webpage 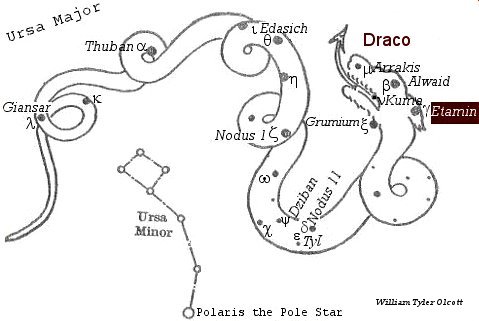 Gamma (γ) Draco, Etamin, is a double orange star in the right eye of the Dragon.

Eltanin, also written Ettanin, Etannin, Etanim, Etamin, etc., is from the 15th century Tartar astronomer Ulug Beg’s Al Ras al Tinnin, the Dragon’s Head, applied to this, as it also {p.208} is to alpha (α Thuban); the Italian astronomer Riccioli (1598–1671) wrote it Ras Eltanim. The word Tinnin is nearly synonymous with Thu’ban (α alpha is Thuban), and the 17th century German astronomer Bayer mentioned Rastaben as one of its titles, the Alfonsine Rasaben, and now Rastaban, “head of the snake” in the Century Cyclopedia; but in early Arabic astronomy it was one of the Herd of Camels alluded to at beta (β Alwaid).

The 14th century Arabian lexicographer Firuzabadi referred to a Ras al Tinnin and Dhanab al Tinnin in the heavens, the Dragon’s Head, and Tail (the Nodes of the Moon, Caput Dragonis

. In Vedic astrology the North Node is refered to as Rahu and the South Node as Ketu.); but these have no connection with our Draco, reference being there made solely to the ascending and descending nodes in the orbits of the moon and planets known to Arabian astronomers under these titles. Primarily, however, these were from India, and known as Rahu and Kitu. This idea seems to have originated from the fact that the moon’s undulating course was symbolized by that of the stellar Hydra; and had the latter word been used instead of “Dragon,” the expression would now be better understood. But it was familiar to seamen as late as the 16th century, for “the head and tayle of the Dragon” [the nodical month also is called the Dracontic, or Draconitic] appears in Eden’s Dedication, of 1574, to Sir Wyllyam Wynter; and even now the symbols,

for the ascending node and

for the descending, are used in text-books and almanacs.

Millenniums before this, however, it was of importance on the Nile, as it ceased to be circumpolar about 5000 B.C., and a few centuries thereafter became the natural successor of Dubhe (alpha α Ursa Major), which up to that date had been the prominent object of Egyptian temple worship in the north, gamma (γ this star Etamin) was known there as Isis, or Taurt Isis,— the former name applied at one time to Sirius,—and it marked the head of the Hippopotamus that was part of our Draco. Its rising was visible about 3500 B.C. Through the central passages of the temples of Hathor at Denderah and of Mut at Thebes; Canopus being, seen through other openings toward the south at the same date. And Lockyer says that thirteen centuries later it became the orientation point of the great Karnak temples of Rameses and Khons at Thebes, the passage in the former, through which the star was {p.209} observed, being 1500 feet in length; and that at least seven different temples were oriented toward it. When precession had put an end to this use of these temples, others are thought to have been built with the same purpose in view; so that there are now found three different sets of structures close together, and so oriented that the dates of all, hitherto not certainly known, may be determinable by this knowledge of the purpose for which they were designed. Such being the case, Lockyer concludes that Hipparchos (circa 160-120 B.C.) was not the discoverer of the precession of the equinoxes, as is generally supposed, but merely the publisher of that discovery made by the Egyptians, or perhaps adopted by them from Chaldaea.

He also states that Apet, Bast, Mut, Sekhet, and Taurt were all titles of one goddess in the Nile worship, symbolized by gamma (γ this star Etamin) Draco

It is interesting to know that the Boeotian Thebes (Greek Thebes), the City of the Dragon, from the story of its founder, Cadmus, shared with its Egyptian namesake (Thebes Egypt) the worship of this star in a temple dedicated, so far as its orientation shows, about 1130 B.C: a cult doubtless drawn from the parent city in Egypt, and adopted elsewhere in Greece, as also in Italy in the little temple to Isis in Pompeii. Here, however, the city authorities interfered with this star-worship in one of their numerous raids on the astrologers, and bricked up the opening whence the star was observed.

Gamma (γ this star Etamin) lies almost exactly in the zenith of Greenwich, in fact, has there been called the Zenith-star (explained here); and, being circumpolar, descends toward the horizon, but, without disappearing, rises easterly, and thus explains the poet’s line:

“the East and the West meet together.”

It was nearer the pole than any other bright star about 4000 years ago. Its minute companion, 21″ distant, at a position angle of 152°, was discovered by Burnham.

It was one of Al’Awa’id, “the Mother Camels” which was known as the Quinque Dromedarii. In the Arabic theme for this constellation the stars beta (Alwaid), gamma (this star Etamin), nu (Kuma) and xi (Grumium) in the Head of the Dragon represent four mother camels protecting a baby camel from the attack of two hyenas (eta and zeta, Nodus 1). The nomads camp located nearby (the three unnamed stars in the neck of the Dragon: upsilon, tau, and sigma).

The astrological influences of the star Etamin

In the “right eye of the Dragon”, gamma Draco has a Saturn-Jupiter nature with Martian influence. According to tradition, the Saturnian predominance will give a liking for solitude. Good mental concentration. Dishonor and downfall and loss of prestige. Esoteric and philosophical studies. [Fixed Stars and Their Interpretation, Elsbeth Ebertin, 1928, p.74, under Ettanin]