The history of the star: Thuban

from p.206 of Star Names, Richard Hinckley Allen, 1889.
[A scanned copy can be viewed on this webpage 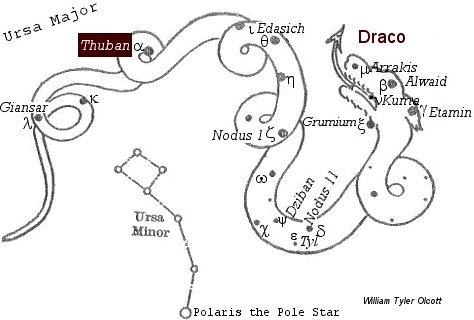 Alpha (α) Draco, Thuban, is a pale yellow star in the Dragon.

Thuban and Al Tinnin are from the Arabic title for the whole of Draco, and Azhdeha from the Persian (Azhdeha is Persian for dragon or serpent).

It is also Adib, Addib, Eddib, Adid, Adive, and El Dsib, all from Al Dhi’bah, the Hyaenas, that also appears for the stars zeta (ζ Nodus 1), eta (η), and iota (ι Edasich), as well as for others in Bootes and Ursa Major. Al Tizini (Arabian astronomer, first half of 16th century) called it Al Dhih, the Male Hyaena.

Among seamen it has been the Dragon’s Tail, a title explained under gamma (γ Etamin):

Allen explains on p.208 under gamma (γ Etamin) – Firuzabadi referred to a Ras al Tinnin and Dhanab al Tinnin in the heavens, the Dragon’s Head

; but these have no connection with our Draco, reference being there made solely to the ascending and descending nodes in the orbits of the moon and planets known to Arabian astronomers under these titles. Primarily, however, these were from India, and known as Rahu and Kitu. This idea seems to have originated from the fact that the moon’s undulating course was symbolized by that of the stellar Hydra; and had the latter word been used instead of “Dragon,” the expression would now be better understood. But it was familiar to seamen as late as the 16th century, for “the head and tayle of the Dragon”[1 The nodical month also is called the Dracontic, or Draconitic.] appears in Eden’s Dedication, of 1574, to Sir Wyllyam Wynter; and even now the symbols,

for the ascending node and

for the descending, are used in text-books and almanacs.

In China this star Thuban was Yu Choo, the Right-hand Pivot; the space towards iota (ι Edasich) being Chung Ho Mun

Sayce says that the great astrological and astronomical work compiled for the first Sargon, king of Agade, or Akkad, devoted much attention to this star, then marking the pole [Polaris marks the Pole nowadays], as Tir-An-na, the Life of Heaven; Dayan Same, the Judge of Heaven; and Dayan Sidi, the Favorable Judge,— all representing the god Caga Gilgati, whose name it also bore. Brown applies these titles to Wega (Vega) of the Lyre, the far more ancient pole-star,— but this was 14,000 years ago !—and cited for alpha (α) Draco Dayan Esiru, the Prospering Judge, or the Crown of Heaven, and Dayan Shisha, the Judge Directing, as having the highest seat amongst the heavenly host [when it was the Pole star]. About 2750 B.C. it was less than 10′ from the exact pole. About 2750 B.C. it was less than 10′ from the exact pole, although now more than 26°; and as it lies nearly at the centre of the figure, the whole constellation then visibly swung around it, as on a pivot, like the hands of a clock, but in the reverse direction.

The star could be seen, both by day and night, from the bottom of the {p.207} central passage of the Great Pyramid of Cheops (Knum Khufu) at Ghizeh, in 30° of north latitude, as also from the similar points in five other like structures; and the same fact is asserted by Sir John Herschel as to the two pyramids at Abousseir. [Allen notes: This passage, 4 feet by 3 ½ feet in diameter and 380 feet long, was directed northward to this star, doubtless by design of the builder, from a point deep below the present base, at an inclination of 26° 17′ to the horizon. At the time of its building, perhaps four millenniums before our era, the Southern Cross (Crux) was entirely visible to the savage Britons,]

Herschel considered that there is distinct evidence of Thuban formerly being brighter than now, as its title from its constellation, and its lettering, would indicate; for with the 17th century German astronomer Bayer it was a 2d-magnitude,— in fact the only one of that brilliancy in his list of Draco,— and generally so in star-catalogues previous to two centuries ago. It culminates on the 7th of June.

“Thuban (Hebrew), the subtle. Some 4,620 years ago it was the Polar Star. It is still a very important star in nautical reckonings, guiding the commerce of the seas, and thus ‘the god of this world’ is represented as winding in his contortions round the pole of the world, as if to indicate his subtle influence in all worldly affairs.” [Witness of the Stars E. W. Bullinger 1893].

The astrological influences of the star Thuban

When rising, Thuban indicates prospectors of gold and silver or those who are ministers of money (this might include accountants, clerical workers, cashiers etc. nowadays). If setting and if Mars is conjunct the descendant or in harsh aspect with it, it is said to presage the native being burned in his own house or killed by public execution [Fixed Stars and Judicial Astrology, George Noonan, 1990, p.6.]