The history of the star: Alpheratz

from p.35 of Star Names, Richard Hinckley Allen 1889.
[A scanned copy can be viewed on this webpage 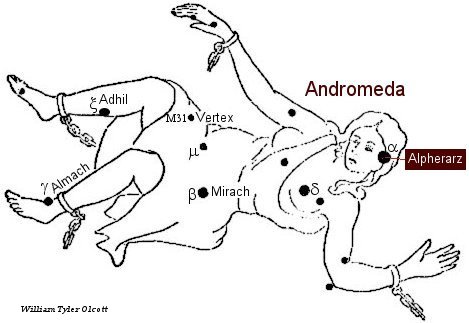 Alpha (α) Andromeda, Alpheratz, is a double star, magnitudes, 2.2 and 11, white and purplish on the Chained Woman’s head.

Alpheratz, Alpherat, and Sirrah derive from the Arabians’ Al Surrat al Faras, “the Horse’s Navel”, as this star formerly was associated with Pegasus, whence it was transferred to the Woman’s hair (the top of Andromeda‘s head); and someone has strangely called it Umbilicus Andromedae (this star is positioned on the Pegasus’s navel, i.e., Latin umbilicus, and also on the top of Andromeda’s head). But in all late Arabian astronomy taken from the second-century Greek astronomer Ptolemy it was interpreted as Al Ras al Mar’ah al Musalsalah, “the Head of the Woman in Chains.”

The Greek astronomer Aratus, circa 270 B.C., designated it as xunos aster (joint or common star, i.e., common to both constellations Andromeda and Pegasus), and it is still retained in Pegasus as the delta (δ) of that figure, although not in general use by astronomers.

In England, two centuries ago, it was familiarly known as Andromeda’s Head

With beta (β) Cassiopeia (Caph), and gamma (γ) Pegasus (Algenib), as “the Three Guides“, it marks the equinoctial colure, the prime meridian of the heavens; and, with gamma (γ) Pegasus (Algenib), the eastern side of the Great Square of Pegasus (The Great Square of Pegasus marked by this star Alpheratz, α Andromeda, and Markab, Scheat, and Algenib, α, β, and γ Pegasus).

In the Hindu lunar zodiac this star, Alpheratz, along with alpha Pegasus (α Markab), beta Pegasus (β Scheat), and gamma Pegasus (γ Algenib), — the Great Square of Pegasus,— constituted the double nakshatra (Hindu Moon Mansion),— the 24th and 25th,— Purva and Uttara Bhadrapadas, “the Former and the Latter Beautiful”, or Auspicious, Feet (perhaps “Auspicious Feet”?); also given as Proshthapadas, “Footstool Feet” while the German Sanskrit scholar Professor Weber says that it was Pratishthana, a Stand or Support, which the four bright stars may represent.

With gamma (γ) Pegasus (Algenib), the determinant star, it formed the 25th sieu (Chinese Moon Mansion) Pi, or Peih, a Wall or Partition {maybe this should be spelled Bì, a Wall}, anciently Lek, and the manzil (Arabic Moon Mansion) Al Fargu, from Al Farigh al Mu’ah’h’ar, “the Hindmost Loiterer” or, perhaps more correctly, “the Hind Spout of the Water-jar”, for the thirteenth century Persian astronomical writer Al Kazwini called it Al Farigh al Thani, the Second Spout; a Well-mouth and its accompaniments being imagined here by the early Arabs.

The Persian title for this lunar station, Miyan; the Sogdian Iranians called it Bar Farshat; the Khorasmian (east of Persia) (a Turkish people), Wabir; and the Coptic people of Egypt, Artulosia, all have somewhat similar meanings.

In astrology alpha (α) portended honor and riches to all born under its influence. [p.35 of Star Names, Richard Hinckley Allen 1889]

The full English translation of the myth of Andromeda as told by Manilius in Astronomica, 1st century A.D. can be found on the Andromeda constellation page. Here is part of it:

“The man whose birth coincides with the rising of Andromeda from the sea will prove merciless, a dispenser of punishment, a warder of dungeon dire; he will stand arrogantly by while the mothers of wretched prisoners lie prostrate on his threshold, and the fathers wait all night to catch the last kisses of their sons and receive into their inmost being the dying breath. From the same constellation comes the figure of the executioner, ready to take money for a speedy death and the rites of a funeral pyre, for him execution means profit, and oft will he bare his axe; in short, he is a man who could have looked unmoved on Andromeda herself fettered to the rock. Governor of the imprisoned he occasionally becomes a fellow convict, chained to criminals so as to save them for execution. [Manilius,Astronomica, 1st century A.D., Book 5, p.351.]”

The astrological influences of the star Alpheratz

According to Ptolemy it is of the nature of Jupiter and Venus, and to these Alvidas adds Mars also. It gives independence, freedom, love, riches, honor and a keen intellect. [Robson, p.133.]

Harmonious nature which makes for popularity. If it is in affinity to propitious stellar bodies and with the personal points MC, Asc, Sun, Moon, one can count on becoming well known in public and popularity with the masses. If connected to the Sun, the native can easily become unpopular and can be toppled over. Also if transiting Saturn passes over the fixed star in conjunction with another stellar body (planet) a weakening of popular appeal is indicated. In this way E. Ebertin noted that, in many cases, directors and administrators, who had in their cosmogram. Sun in conjunction with this star, lost their posts, when in 1938 and 1939 transiting Saturn passed over this conjunction. [Fixed Stars and Their Interpretation, Elsbeth Ebertin, 1928, p.13, under the name Sirrah]

With a malefic and the Moon at the same time with Sirius, death by a fiery cutting weapon or from beasts; if the Moon be with Vega, violent death. [Robson, p.133.]

With Sun: Honor, preferment and favors from others. [Robson, p.133.]

With Saturn: Open and affable but miserly, seeks popularity, pretends to be religious for business ends, favors from clergy and lawyers, likelihood of wealth, domestic harmony, liable to diseases in the head and tumors that finally cause death. [Robson, p.134.]

With Uranus: Just, honorable, good speaker, domestic harmony if male, but not so fortunate for female, benefit from practical application of ideas, interest in occultism, considerable psychic power if female, favorable for gain. [Robson, p.134.]