The history of the star: Caph

from p.146 of Star Names, Richard Hinckley Allen, 1889.
[A scanned copy can be viewed on this webpage 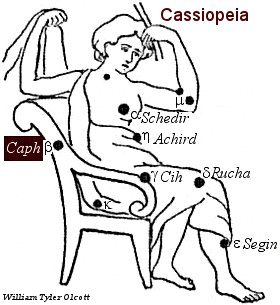 Beta (β) Cassiopeia, Caph, is a white star on the upper right-hand corner of the chair that the Ethiopian Queen is seated on.

Caph, Chaph, or Kaff, on the upper right-hand corner of the chair, are from the Arabic title of the constellation Cassiopeia; but Al Tizini (Arabian astronomer, first half of 16th century) designated the star as Al Sanam al Nakah, the Camel’s Hump, referring to the contemporaneous Persian figure.

With alpha (α) Andromeda (Alpherarz) and gamma (γ) Pegasus (Algenib), as the Three Guides, it marks the equinoctial colure, itself exceedingly close to that great circle; and, being located on the same side of the pole as is Polaris, it always affords an approximate indication of the latter’s position with respect to that point. This same location, 32° from the pole, and very near to the prime meridian, has rendered it useful for marking sidereal time. When above Polaris and nearest the zenith the astronomical day begins at 0 hours, 0 minutes, and 0 seconds; when due west the sidereal time is 6 hours; when south and nearest the horizon, 12 hours, and when east, 18 hours; this celestial clock-hand thus moving on the heavenly dial contrary to the motion of the hands of our terrestrial clocks, and at but one half the speed.

Influences: According to Ptolemy this constellation is of the nature of Saturn and Venus. It is said to give haughtiness, boastfulness and exaggerated pride, but at the same time the power of commanding respect. It is associated by the Kabalists with the Hebrew letter Beth and the 2nd Tarot Trump “The High Priestess.” [Robson, p.36.]

“Cassiope will produce goldsmiths who can turn their work into a thousand different shapes, endow the precious substance with yet greater value, and add thereto the vivid hue of Jewels. From Cassiope come the gifts of Augustus which gleam in the temples he consecrated, where the blaze of gold rivals the sun’s brightness and the fires of gems flash forth light out of shadow. From Cassiope come the memorials of Pompey’s triumph of old and the trophies which bear the features of Mithridates: they remain to this very day, spoils undimmed by the passage of time, their sparkle as fresh as ever.

“From Cassiope come the enhancement of beauty and devices for adorning the body: from gold has been sought the means to give grace to the appearance; precious stones have been spread over head, neck, and hands and golden chains have shone on snow-white feet. What products would a grand lady like Cassiope prefer her sons to handle rather than those she could turn to her own employments? And that material for such employment should not be lacking, she bids men look for gold beneath the ground, uproot all which nature stealthily conceals, and turn earth upside down in search of gain; she bids them detect the treasure in lumps of ore and finally, for all its reluctance, expose it to a sky it has never seen. The son of Cassiope will also count greedily the yellow sands, and drench a dripping beach with a new flood; he will make small weights to measure the tiny grains, or else will collect the wealth of gold-foaming Pactolus [Pactolus]; or he will smelt lumps of silver, separating the hidden metal and causing the mineral to flow forth in a running stream; otherwise he will become a trader of the metals produced by these two craftsmen, ever ready to change coinage of the one metal into wares of the other. Such are the inclinations which Cassiope will fashion in those born under her” [Astronomica, Manilius, 1st century AD, p.343.]

The astrological influences of the star Caph

A troublemaker as concerns the fortunes of Islam. [Fixed Stars and Judicial Astrology, George Noonan, 1990, p.12.].