The history of the star: Markab

from p.324 of Star Names, Richard Hinckley Allen, 1889.
[A scanned copy can be viewed on this webpage

Alpha (α) Pegasus, Markab, is a white star on the wing of the Winged Horse. 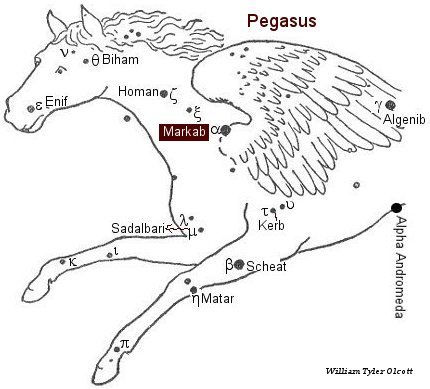 Markab — Flamsteed’s Marchab — is the Arabs’ word for a Saddle, Ship, or Vehicle,— anything ridden upon,— that was early applied to this star; but they also designated it as Matn al Faras, the Horse’s Withers or Shoulder, and the 17th century German astronomer Bayer cited Yed Alpheras, the Horse’s Hand, or, more properly, Forearm,—the Arabian Yad. The 13th century Persian astronomical writer Al Kazwini knew it and beta (β Scheat) as Al Arku-wah, the Cross-bar of the well in which Al Dalw, the Bucket, was used!

In India it was noted as the junction star of the Bhadra-pada nakshatras (Hindu Moon Mansions), detailed under beta (β Scheat).

{p.325} In China it was Shin, a title borrowed from the sieu (Chinese Moon Mansion) that it marked.

Brown thinks that, with gamma (γ Algenib) and zeta (ζ Homam), it was the Euphratean asterism Lik-bar-ra, the Hyaena,—perhaps Ur-bar-ra

Among astrologers it portended danger to life from cuts, or stabs, and fire [cuts and stabs can be operations nowadays]. It culminates on the 3rd of November, and when on the meridian forms, with gamma (γ), the southern side of the Great Square, beta (β Scheat) and delta (δ) forming the northern, and all 15° to 18° apart.

It is one of the so-called lunar stars, much observed in navigation.

In the Hindu lunar zodiac alpha Andromeda (Alpheratz), alpha Pegasus (α, this star Markab), beta Pegasus (β, Scheat), and gamma Pegasus (γ Algenib), —  were “the Great Square of Pegasus” a large asterism that constituted the double Hindu nakshatra (Mansion of the Moon), — the 24th and 25th, — Purva and Uttara Bhadrapadas, the Former and the Latter, Beautiful, Auspicious, or Happy Feet, sometimes also called Proshthapada, (this star was noted as the junction star of the Bhadra-pada nakshatras) with various meanings; “Carp”, “Ox” “Footstool Feet,” “Couch” or “Bed”, “Bifaced Figure”, or “Twins”, “Stand” or “Support”: The regents of these nakshatras being Aja Ekapat, the “One-footed Goat”, and Ahi Budhya, the “Bottom Snake”, “two mythical figures, of obscure significance, from the Vedic Pantheon.”

The 24th, “The Former Beautiful”; and 25th, “The Latter Beautiful”; Hindu nakshatras are considered a double. These two moon mansions comprise “The Great Square of Pegasus” which consists of four stars; Alpheratz, Algenib, Markab and Scheat. It is unclear which regent (listed below) relates to which of these two nakshatras? It is also unclear to me which of the four stars belong to which of the two nakshatras. Robson lists only one star in each, the leading or junction stars; this star Markab in the 24th, and Algenib in the 25th.

Influences of the 24th Hindu Moon Mansion Purva Bhadrapada: A severe asterism belonging to the Brahmin caste and favorable for acts of disgrace, destruction, deceit, imprisonment, beating, burning and poison when containing the Moon. Those born on the lunar day will be wicked, mean, deceitful, shepherds, thieves, torturers, and irreligious. With Moon here at birth native will be sorrowful, wealthy, clever, submissive to women, miserly and of distinct speech. Rules the southeast of houses and the left thigh. [Robson, p.85.]

The astrological influences of the star Markab

According to Ptolemy it is of the nature of Mars and Mercury; to Simmonite, of Mars and Venus; and, to Alvidas, of Jupiter in square to Mercury with Saturn from Pisces and Gemini. It gives honor, riches, fortune, danger from fevers, cuts, blows, stabs [can be operations nowadays] and fire and a violent death. [Robson, p.174.]

It has a Mercury-Mars nature. Tradition has it that, in conjunction with Mars, Uranus or Saturn, this will bring dangers from fire, weapons or explosions. Tied up with propitious stellar bodies, Markeb is said to influence above all the spiritual and mental nature, to give a good head for figures, intellectual alertness, mental powers in general and last but not least, the ability to further propaganda activity, if at the same time relevant aspects are also present. [Fixed Stars and Their Interpretation, Elsbeth Ebertin, 1928, p.81.]

With a malefic and the Moon at the same time with Alnilam, Alnitak and Mintaka – Orion’s Belt (22-24 Gemini) death by drowning. [Robson, p.174.]

With Moon: Injuries from enemies and domestic matters, fairly good health but many accidents. If Mars be with Moon, death by wild beasts or soldiers. If a malefic be with Cingula Orionis (Orion’s Belt; 22-24 Gemini), death by human hands. [Robson, p.174.]

With Venus: Evil associates, drink and other excesses. [Robson, p.174.]

With Mars: Quarrelsome, violent, many difficulties and losses through Mercurial affairs. [Robson, p.174.]

With Jupiter: Trouble and loss through legal matters, danger of judicial sentence or banishment and exile. [Robson, p.174-175.]

With Saturn: Born in poverty, prison or asylum, may be abandoned, hard life, imprisoned for crime, few friends, unfavorable for domestic matters, death under similar conditions to birth. [Robson, p.175.]