The history of the star: Algenib

from p.326 of Star Names, Richard Hinckley Allen, 1889.
[A scanned copy can be viewed on this webpage

Gamma (γ) Pegasus, Algenib, is a white star marking the tip of the Winged Horse’s wing. 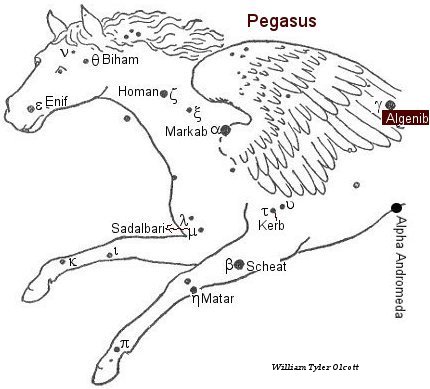 Gamma (γ Algenib), marks the extreme tip of the Horse’s wing, so that its name Algenib has been considered as derived from Al Janah, the Wing, but it probably is from Al Janb, the Side. It has sometimes been written Algemo. The Persian astronomer Al Biruni (973-1048 A.D.) quoted it, with delta (δ which is now Alpheratz, the alpha (α) star of Andromeda), as Al Fargh al Thani, the Second, or Lower, Spout, i.e. of the Bucket. This also is the title of the 25th manzil (Arabic Moon Mansion), but appears in  the 19th American philologist Professor Whitney’s’s list as Al Fargh al Mu’liir, the Rear Spout, and in the English astronomer Smyth (1788-1865)’s as Al Fargu

The 14th century Greco-Persian astronomer Chrysococca called it (Greek) Pegasos from the constellation.

Reeves said that it is the Chinese Peih, a Wall or Partition, thus taking the title of the 25th sieu (Chinese Moon Mansion), which it marked and, with delta (δ which is now Alpheratz, the alpha (α) star of Andromeda), constituted. It lies at the junction of the nakshatras (Hindu Moon Mansions) Bhadrapada and Revati; and, with delta (δ Alpheratz), was included in the corresponding lunar station of several other nations.

{p.327} With the same star and beta (β) Cassiopeia (Caph) it makes up the Three Guides, all these being almost exactly on the prime meridian, the vernal equinox lying in a starless region of Pisces about 15° south of gamma (γ Algenib) Pegasus

The Pegasus Syndrome, as exemplified in the legends of Perseus and Bellerophon, is concerned with the innate ability possessed by some people to negotiate difficulties by rising above them, on the one hand, and the danger of overreaching themselves, on the other. Pegasus, by birth, is the child of Medusa and Neptune, symbols of ‘wisdom’ and ’emotion,’ respectively, which shows the dichotomy of his nature. As in the story, Bellerophon attempted to fly to Olympus (overreach his potential). He believed that Pegasus was subject to his will. However, it was Pegasus who made it to Olympus, while Bellerophon was tossed back to earth, lame and reproached by others. It is unwise to take any situation for granted as the ‘lesser’ person (or, in this case, beast) may be the very one to teach us the much needed lesson in humility. Pegasus is also indicative of a specific mission in life which the inquirer will always find the time and energy to pursue, although the path may be sewn with difficulties (the Chimaera) and limitations (Bellerophon’s doubt or arrogance). So, the Pegasus Syndrome is the seeming ability to “fly over any situation,” though the reverse may be a lesson in humility, being “taken down a peg,” as it were. [Rich’s Pegopedia http://thanasis.com/pegasus.htm

The astrological influences of the star Algenib

Of the nature of Mars and Mercury. It gives notoriety, dishonor, violence, misfortune, and denotes the naked and poor professional beggar. [Robson, p.122.]

Penetrating mind and a strong will, as well as determination. An impressive way of speaking and a gift for oratory. In conjunction with the Sun, it will make for a fighting spirit and a love of learning. Connected with Mercury, Venus and Jupiter, one can count popularity and interest in art and literature and distinction; if not further configurations also point to similar gifts. With Saturn, in general, it is thought of as an impeding factor, but has a name for good memory according to Morin. If angular with Mercury and Uranus, Algenib will make for an inventive spirit. [Fixed Stars and Their Interpretation, Elsbeth Ebertin, 1928, p.12, Algenib is given as alpha Pegasus which is an error because the name and degrees are right for this star Algenib, gamma.]

A fighting spirit and a love of learning. [Fixed Stars and Their Interpretation, Elsbeth Ebertin, 1928, p.12.]

With Uranus: Active and eccentric mind, reformer or agitator, great influence over the minds of others necessitating journeys, peculiar ideas in advance of the time, mystic and fond of mysteries though frank and open, domestic troubles especially in a woman’s map. [Robson, p.122.]