The history of the star: Algol

from p.332 of Star Names, Richard Hinckley Allen, 1889.
[A scanned copy can be viewed on this webpage 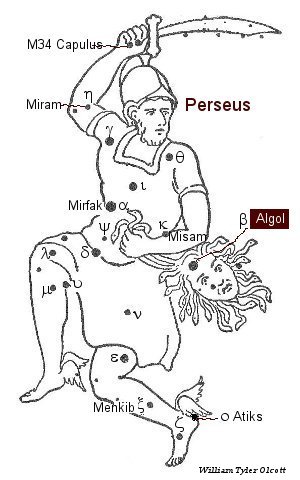 Beta (β) Perseus, Algol, is a bright star positioned on the severed head that Perseus is carrying. It is an eclipsing binary; every 68 hours and 49 minutes this Demon Star ‘blinks’ for roughly 8 hours as the dimmer star of the pair passes between the brighter and the earth.

"the Gorgon’s head, a ghastly sight,

Deformed and dreadful, and a sign of woe." — Bryant’s translation of the Iliad

Algol, the Demon, the Demon Star, and the Blinking Demon, from the Arabians’ Ra’s al Ghul, the Demon’s Head, is said to have been thus called from its rapid and wonderful variations; but I find no evidence of this [Star Names was published in 1889, it was that year that Algol was discovered to be an eclipsing binary — Wikipedia], and that people probably took the title from the second-century Greek astronomer Ptolemy. Al Ghul literally signifies a Mischief-maker, and the name still appears in the Ghoul of the Arabian Nights and of our day. It degenerated into the Alove often used some centuries ago for this star.

The second-century Greek astronomer Ptolemy catalogued it as ton en gorgonio o lampros, "the bright one of those in the Gorgon’s head," which Al Tizini (Arabian astronomer, first half of 16th century) followed in his Na’ir (bright), for, with pi (π), rho (ρ), and omega (ω), it made up that well-known group, itself being the Gorgonea prima; the Gorgonion of the 14th century Greco-Persian astronomer Chrysococca, Gorgoneum Caput of Vitruvius, Caput Gorgonis of Hyginus, and the Gorgonis Ora of Manilius (1st century A.D.).

With astronomical writers of three centuries ago Algol was Caput Larvae, the Spectre’s Head.

Hipparchos (circa 160-120 B.C.) and Pliny (23-79 A.D.) made a separate constellation of the Gorgon stars as the Head of Medusa, this descending almost to our own day, although always connected with Perseus

The Hebrews knew Algol as Rosh ha Satan, Satan’s Head, English writer on globes John Chilmead (circa 1639)’s Rosch hassatan, the Divels head; but also as Lilith, Adam’s legendary first wife**, the nocturnal vampyre from the lower world that reappeared in the demonology of the Middle Ages as the witch Lilis, one of the characters in Goethe’s Walpurgis Nacht

The Chinese gave it the gruesome title Tseih She, the Piled-up Corpses.

{p.333} Astrologers of course said that it was the most unfortunate, violent, and dangerous star in the heavens, and it certainly has been one of the best observed, as the most noteworthy variable in the northern sky.

**[Allen notes at end of page 332 of Star Names: We are indebted to the Talmudists for this story, which probably originated in Babylonia; and they added that, after Adam had separated from Lilith and their demon children, Eve was created for him. Our Authorized Version renders the original word in Isaiah xxxiv, 14, by "screech owl"; the Revised Version, by "night-monster"; Cheyne adopts the Hebrew Lilith in the Polychrome Bible; and Luther’s Bible had Kobold, but this corresponded to the Scottish Brownie and the English "Robin Goodfellow,"—Shakespeare’s "Puck." Saint Jerome’s Vulgate translated it "Lamia," the Greek and Roman title for the fabled woman, beautiful above, but a serpent below, that Keats reproduced in his Lamia.]

Legend: Algol represents the head of the Gorgon Medusa who was slain by Perseus. Medusa, who was the only mortal one of the three Gorgon sisters, was originally a beautiful maiden, but her hair was changed into hissing serpents by Minerva in consequence of her having become by Neptune the mother of Chrysaor and Pegasus in one of Minerva’s temples. This gave her so fearful an appearance that everyone who looked at her was changed into stone.  [Robson, p.123.]

The astrological influences of the star Algol

Of the nature of Saturn and Jupiter. It causes misfortune, violence, decapitation, hanging, electrocution and mob violence, and gives a dogged and violent nature that causes death to the native or others. It is the most evil star in the heavens. [Robson, p.124.]

Poor teeth. Brutality and violence. Arabic commanders in chief, in times of conquest, made it a point that no important battles were begun when the light of Algol was weak (Algol is an eclipsing binary – every 68 hours and 49 minutes the demon ‘blinks’ for roughly 8 hours as the dimmer star of the pair passes between the brighter and the earth). [Fixed Stars and Their Interpretation, Elsbeth Ebertin, 1928, p.24.]

If culminating: Murder, sudden death, beheading, prone to murder and mischief. If at the same time in conjunction with Sun, Moon or Jupiter, gives victory over others in war. [Robson, p.124.]

With the Hyleg and angular, decapitation or a murderer who meets with a violent death. [Robson, p.124.]

With Fortuna or its dispositor, poverty. [Robson, p.124.]

With Sun: Violent death or extreme sickness. If also in no aspect to a benefic, or there is no benefic in the 8th house, and the dispositor of the Sun in a day nativity or if the Moon in the night one is in square or opposition to Mars, the native will be beheaded; if the luminary culminate he will be maimed, mangled, wounded or torn to pieces alive; and if Mars is at the same time in Gemini or Pisces his hands or feet will be cut off. [Robson, p.124.]

With Mars: or if Mars be elevated above the luminaries when Algol is angular, the native will be a murderer who will come to an untimely end. The same is caused by Algol angular or with the hyleg. [Robson, p.124.]