The history of the star: Scheat

Beta (β) Pegasus, Scheat, is deep yellow star on the leg of the Winged Horse. 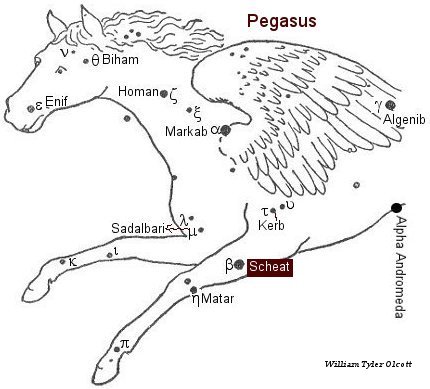 The Great Square of Pegasus which consists of four stars; Alpheratz, Algenib, Markab and Scheat, of which this star beta (β Scheat) formed one corner, constituted the double asterism, the 24th and 25th nakshatras (Hindu Moon Mansions) Purva, Former, and Uttara, Latter, Bhadra-pada, Beautiful, Auspicious, or Happy Feet, sometimes also called Proshtha-pada, Proshtha meaning a Carp or Ox; but  the 19th American philologist Professor Whitney’s translated it “Footstool Feet,” and said that the authorities do not agree as to the figures by which they are represented, for by some the one, by others the other, is called a Couch or Bed, the alternate one, in either case, being pronounced a Bifaced Figure, or Twins. This Couch is a not inapt representation of the group if both asterisms are taken together, the four stars well marking the feet. The German Sanskrit scholar Weber calls them Pratishthana, a Stand or Support, as  the 19th American philologist Professor Whitney’s wrote,

an evident allusion to the disposition of the four bright stars which compose it, like the four feet of a stand, table, bedstead, or the like;

The regents of these nakshatras (Hindu Moon Mansion) being Aja Ekapat, the One-footed Goat, and Ahi Budhya, the Bottom Snake, “two mythical figures, of obscure significance, from the Vedic Pantheon.”

They also were the 24th sieu (Chinese Moon Mansion) was these same stars known as Ying She, or Shih, a House, anciently Sal and Shat; but it also comprised parts of Aquarius and Capricornus.

They also were the Persian Vaht, the Sogdian Iranian and Khorasmian (east of Persia) Farshat Bath, and the Coptic people of Egypt Artulos, all signifying something pertaining to Water; while in astrology beta (β Scheat) indicated danger to mankind from that element.

Scheat is called “Who Goes Forth and Returns” – Bullinger.

The Pegasus Syndrome, as exemplified in the legends of Perseus and Bellerophon, is concerned with the innate ability possessed by some people to negotiate difficulties by rising above them, on the one hand, and the danger of overreaching themselves, on the other. Pegasus by birth, is the child of Medusa and Neptune, symbols of ‘wisdom’ and ’emotion,’ respectively, which shows the dichotomy of his nature. As in the story, Bellerophon attempted to fly to Olympus (overreach his potential). He believed that Pegasus was subject to his will. However, it was Pegasus who made it to Olympus, while Bellerophon was tossed back to earth, lame and reproached by others. It is unwise to take any situation for granted as the ‘lesser’ person (or, in this case, beast) may be the very one to teach us the much needed lesson in humility. Pegasus is also indicative of a specific mission in life which the inquirer will always find the time and energy to pursue, although the path may be sewn with difficulties (the Chimaera) and limitations (Bellerophon’s doubt or arrogance). So, the Pegasus Syndrome is the seeming ability to “fly over any situation,” though the reverse may be a lesson in humility, being “taken down a peg,” as it were. [Rich’s Pegopediahttp://thanasis.com/pegasus.htm].

The astrological influences of the star Scheat

According to Ptolemy it is of the nature of Mars and Mercury; to Simmonite, of Saturn; to other authors, of Saturn and Mercury; and, to Alvidas, of Neptune in square to Saturn or Mars. It causes extreme misfortune, murder, suicide, and drowning. [Robson, p.206.]

Tied up with ‘malefics’, this could lead the native to lose his life in catastrophes, such as floods, shipwreck, mining accidents, airplane accidents, or maybe suicide. On the other hand, it is possible for a positive influence to emanate from Scheat, but only for some people, it can have a positive effect on their mental creativity, if these people are ready to receive such inflow (examples listed). [Fixed Stars and Their Interpretation, Elsbeth Ebertin, 1928, p.82.]

With a malefic and the moon with Sirius (29 Leo), death by fiery cutting weapons or by beasts. If the Moon be with Vega (14 Capricorn), violent death. [Robson, p.206.]

With Sun: Danger through water and engines, liable to accidents or drowning. [Robson, p.206.]

With Moon: Worry, loss and gain of friends through criticism, danger of accidents and by water. [Robson, p.206.]

With Mercury: Many accidents and narrow escapes especially by water, many enemies, trouble through writings, bad for health and domestic affairs. [Robson, p.206.]

With Venus: Evil environment, suffering through own acts, danger of imprisonment or restraint. [Robson, p.207.]

With Mars: Many accidents, sickness to native and relatives. [Robson, p.207.]

With Jupiter: Many voyages, losses through law, friends and relatives, danger of imprisonment. [Robson, p.207.]

With Saturn: Danger of death in infancy, domestic trouble, colds and consumption, death by drowning or accident. [Robson, p.207.]

With Uranus: Deceitful, vacillating, little concentration, psychic, unreliable, involved in difficulties due to own acts, many accidents, death through drowning or by water especially if in 1st, 6th, 8th or 10th houses. [Robson, p.207.]