The history of the star: Vega

from p.284 of Star Names, Richard Hinckley Allen, 1889.
[A scanned copy can be viewed on this webpage

Alpha (α) Lyra, Vega, is a pale sapphire star in the Lyre. 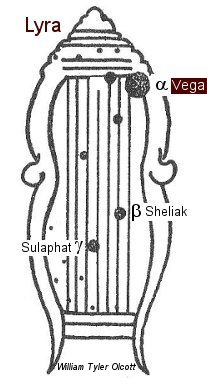 Wega, less correctly Vega, originated in the Alfonsine Tables from the Waki of the Arabs, Bayer having both titles; Scaliger, Waghi; Riccioli, VuegavelVagieh; and Assemani, Veka

Among Latin writers it was Lyra, in classical days as in later, seen in the Almagest of 1551 as Fulgens quae in testa est & vocatur Lyra; and in Flamsteed’s Testa fulgida dicta Lyra; but Cicero also used Fidis specially for the star, as did Columella and Pliny, Fides and Fidicula, its preeminent brightness fully accounting for the usurpation of so many of its constellation’s titles, indeed undoubtedly originating them. In Holland’s translation of Pliny it is the Harp-star

The Romans made much of it, for the beginning of their autumn was indicated by its morning setting. It was this star that, when the hour of its rising was alluded to, called forth Cicero’s remark, “Yes, if the edict allows it,” — a contemptuous reference to Caesar’s arbitrary, yet sensible, interference with the course of ancient time in the reformation of the calendar, an interference that occasioned as much dissatisfaction in his day as did Pope Gregory’s reform in the 16th century.

Sayce identifies Wega, in Babylonian astronomy, with Dilgan, the Messenger of Light, a name also applied to other stars; and Brown writes of it:

At one time Vega was the Pole-star called in Akkadian Tir-anna (“Life of Heaven”), and in Assyrian Dayan-same (“Judge of Heaven”), as having the highest seat therein;

but fourteen millenniums have passed since Wega occupied that position!

The Chinese included alpha (α Vega) with epsilon (ε) and zeta (ζ) in their Chih Neu, the Spinning Damsel, or the Weaving Sister, at one end of the Magpies’ Bridge over the Milky Way, — Aquila, their Cow Herdsman, being at the other; but the story, although a popular one not only in China, but also in Korea and Japan, is told with many variations, parts of Cygnus sometimes being introduced.

These same three stars were the 20th nakshatra, Abhijit, Victorious, the most northern of these stellar divisions and far out of the moon’s path, but apparently utilized to bring in this splendid object; or, as Mueller says, because it was of specially good omen, for under its influence the gods had vanquished the Asuras; these last being the Hindu divinities of evil, similar to the Titans of Greece. It was the doubtful one of that country’s lunar stations, included in some, but omitted in others of their lists in all ages of their astronomy, and entirely different from the corresponding manzil and sieu, which lay in Capricorn. The Hindus figured it as a {p.286} Triangle, or as the three-cornered nut of the aquatic plant Cringata, Wega marking its junction with the adjoining Çravana.

Hewitt says that in Egypt it was Ma’at, the Vulture-star, when it marked the pole, — this was 12,000 to 11,000 B.C. (!), — and Lockyer, that it was the orientation point of some of the temples at Denderah long antecedent to the time when gamma γ Draco (Etamin) and α Ursa Major (Dubhe) were so used, — probably 7000 B.C., — one of the oldest dates claimed by him in connection with Egyptian temple worship.

Owing to precession, it will be the Polaris of about 11,500 years hence, by far the brightest in the whole circle of successive pole-stars, and then 4½° from the exact point, as it was about 14,300 years ago. In 1880 it was 51°20′ distant. Professor Lewis Boss and Herr Stumpe place near it the Apex of the Sun’s Way.

With epsilon (ε) and zeta (ζ) it formed one of the Arabs’ several Athāfiyy, this one being “of the people,” while the others, fainter in Aries, Draco, Musca, and Orion, were “of the astronomers”; for sky objects are often very plain to them that are invisible to the ordinary observer.

Vega, along with Deneb Adige in the Swan, and Altair in the Eagle, forms the Great Summer Triangle. [Robson].

Alpha (α Vega) with epsilon (ε) and zeta (ζ) were the 20th nakshatra, Abhijit, Victorious, the most northern of these stellar divisions and far out of the moon’s path, but apparently utilized to bring in this splendid object; or, as Mueller says, because it was of specially good omen, for under its influence the gods had vanquished the Asuras; these last being the Hindu divinities of evil, similar to the Titans of Greece. The symbol is a Triangle or Three-Cornered Nut. It is an asterism belonging to the Vaisya caste (traders) and is used only in horary astrology. [Robson, p.84.]

No further astrological influences are given for Abhijit by Robson.

Influences: “According to Ptolemy Lyra (a musical instrument) is like Venus and Mercury. It is said to give an harmonious, poetical and developed nature, fond of music and apt in science and art, but inclined to theft. By the Kabalists it is associated with the Hebrew letter Daleth and the 4th Tarot Trump, The Emperor”. [Robson, p.51.]

“… and one may see among the stars the Lyre, its arms spread apart in heaven, with which in time gone by Orpheus charmed all that his music reached, making his way even to the ghosts of the dead and causing the decrees of hell to yield to his song. Wherefore it has honour in heaven and power to match its origin: then it drew in its train forests and rocks; now it leads the stars after it and makes off with the vast orb of the revolving sky”. [Manilius, Astronomica, 1st century AD, book 1, p.30]

“Next, with the rising of the Lyre, there floats forth from Ocean the shape of the tortoise-shell testudinis), which under the fingers of its heir (Mercury) gave forth sound only after death; once with it did Orpheus, Oeagrus’ son, impart sleep to waves, feeling to rocks, hearing to trees, tears to Pluto, and finally a limit to death. Hence will come endowments of song and tuneful strings, hence pipes of different shapes which prattle melodiously, and whatever is moved to utterance by touch of hand or force of breath. The child of the Lyre will sing beguiling songs at the banquet, his voice adding mellowness to the wine and holding the night in thrall. Indeed, even when harassed by cares, he will rehearse some secret strain, tuning his voice to a stealthy hum and, left to himself, he will ever burst into song which can charm no ears but his own. Such are the ordinances of the Lyre, which at the rising of Libra’s twenty-sixth degree will direct its prongs to the stars”. [Manilius, book 5, Astronomica, 1st century AD, p.327].

The astrological influences of the star Vega

Note: Vega is listed under Wega in Robson’s book Fixed Stars and Constellations in Astrology

According to Ptolemy it is of the nature of Venus and Mercury; and, to Alvidas, of Saturn in trine to Jupiter from the earthy signs especially Capricorn and Taurus. It gives beneficence, ideality, hopefulness, refinement and changeability, and makes its natives grave, sober, outwardly pretentious and usually lascivious. [Robson, p.216.]

In a good cosmic configuration, Vega is supposed to give artistic talents especially for music and acting, but also a liking for good living. With eccentric artists, this may lead to a debauched life. Tied up with Jupiter or Venus, Vega is said to pave the way to riches and fame. However, if other influences play a part, this wealth may be lost again. High success is promised if Vega is positioned on the Asc or MC. One can find Vega in corresponding aspects in birth charts of statesmen, politicians, persons of importance and influential persons with adequate aspects. In connection with the Moon or Neptune a tendency for occult and mysticism may be given. [Fixed Stars and Their Interpretation, Elsbeth Ebertin, 1928, p.75-76.]

Associated with wealth and pretentiousness. [Larousse Encyclopedia of astrology].

If Rising: Can be trained in duties of court. Avengers of crimes and in charge of public courts and inquires. If Saturn is in any aspect with Vega when rising, the native will pursue this vocation with a fanaticism to the point of utilizing tortures and executions to stamp out what he considers evil. [Fixed Stars and Judicial Astrology, George Noonan, 1990, p.12.]

With Sun: Critical, abrupt, reserved, unpopular, fleeting honors, influential position, insincere friends. If with Mars also, above the earth, and the Moon be with Procyon, death from the bite of a mad dog. [Robson, p.217.]

With Moon: Public disgrace, probably through forgery, loss through writings, some ill-health, success in business, gain through an annuity or pension. If a malefic be with Scheat, violent death. [Robson, p.217.]

With Neptune: Timid, fond of music, occult interests, practical and scientific mind, associated with occult societies, material success, home may be broken up, liable to accidents, natural death in old age especially when Mars is in favorable aspect. [Robson, p.217.]