The history of the star: Altair

from p.59 of Star Names, Richard Hinckley Allen, 1889.
[A scanned copy can be viewed on this webpage 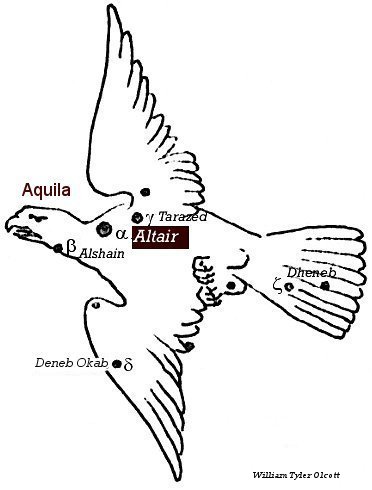 Alpha (α) Aquila, Altair, is a pale yellow star in the neck of the Eagle.

Altair is from a part of the Arabic name for the constellation; but occasionally is written Althair, Athair, Attair, and Atair; this last readers of Ben Hur will remember as the name of one of the shaykh Ilderim’s horses in the chariot race at Antioch. And the word has been altered to Alcair, Alchayr, and Alcar

In the Syntaxis it was Aetos (Greek for “eagle”), one of the second-century Greek astronomer Ptolemy’s few stellar titles, probably first applied to this star alpha (α), and after the formation of the figure (constellation Aquila) transferred to the latter, as in other instances in the early days of astronomy. Even six or seven centuries before Ptolemy it was referred to as Aietos (Greek for “eagle”) where the chorus in the Resos (Rhesus), until recently attributed to Euripides, says:

“What is the star now passing?”

“The Pleiades show themselves in the east,

The Eagle soars in the summit of heaven.”

It is supposed that long antecedent to this it was the Euphratean Idχ, the Eagle, or Erigu, the Powerful Bird, inscriptions to this effect being quoted by Brown, who thinks that it also was the Persian Muru, the Bird; the Sogdian Iranians Shad Mashir, and the Khorasmian (east of Persia) Sadmasij, the Noble Falcon.

In Mr. J. F. Hewitt’s EssaysontheRulingRacesofPrehistoricTimes it is asserted that later Zend mythology knew Altair as Vanant [“In Zoroastrian tradition Vanant is considered to a guardian of goodness. An invocation of the Vanant Yasht is believed to be a potent remedy for fighting evil.” – – Wikipedia], the Western Quarter of the heavens, which earlier had been marked by our Corvus

Alpha (α Altair), with beta (β Alshain), and gamma (γ Tarazed) constituted the twenty-first nakshatra (Hindu Moon Mansion) Çravana, the Ear, and probably was at first so drawn, although also known as Çrona, Lame, or as Açvattha, the Sacred Fig Tree, Vishnu being regent of the asterism; these stars representing the Three Footsteps with which that god strode through the heavens, a Trident being the symbol.

In astrology Altair was a mischief-maker, and portended danger from reptiles.

It marks the junction of the right wing with the body of the eagle.

5° to the eastward of Altair lies the radiant point of the Aquilids, the meteor stream.

Alpha (α Altair), with beta (β Alshain), and gamma (γ Tarazed) constituted the twenty-first nakshatra (Hindu Moon Mansion) Çravana, the Ear, and probably was at first so drawn, although also known as Çrona, Lame, or as Açvattha, the Sacred Fig Tree, Vishnu being regent of the asterism; these stars representing the Three Footsteps with which that god strode through the heavens, a Trident being the symbol. [Star Names, Allen, p.59.]

Antinous is now taken as part of this constellation. [Altair is said to be included and those stars south of Altair are; beta (Alshain), gamma (Tarazed), iota, eta and lambda]. Antinous lies just south of Altair in Aquila. No astrological influences were suggested for this constellation by the ancients, but it seems to have been associated with the ideas of passion, love and friendship, for certain of its components stars were named Alkhalimain or Al Halilain, the “Two Friends”, by the Arabs, and the Kabalists associated it with the Hebrew letter Vau and the 6th Tarot Trump “The Lovers.” It has also been said to give a love of swimming, and to be connected with certain sex irregularities [catamite-pedophilia associations, involving young boys and older men, see the Aquila constellation page for the related myths and stories], the latter probably being greatest in that part of the constellation lying in Capricorn. [Robson].

The astrological influences of the star Altair

Opinions are divided as to the exact nature of this star. Ptolemy gives Mars and Jupiter, Wilson, Saturn and Mercury; Simmonite, Uranus; and Alvidas, Uranus and Mercury in sextile to the Sun. It confers a bold, confident, valiant, unyielding, ambitious and liberal nature, great and sudden but ephemeral wealth, and a position of command, makes its natives guilty of bloodshed, and gives danger from reptiles. [Robson, p.135.]

Tied up with benefic stellar bodies, Altair is credited with bestowing hardiness, courage and generosity, especially if on the Ascendant. If Mercury and Moon are positioned here, this will make people as bold as brass and foolhardy in order to assert themselves. Near the upper Meridian (MC) and in good aspect, Altair promises rise in life and honors. The native tries with sincere conviction to reach out for his aims with utmost will-power. He will avoid nothing in order to achieve them. Altair is good for advancement of lawyers and military men. [Fixed Stars and Their Interpretation, Elsbeth Ebertin, 1928, p.67.]

With Sun: Public honor, notoriety, favors from superiors, many friends and some envious ones who cause trouble through writings, some ill-health and losses, danger of bites from venomous animals. [Robson, p.135.]

With Moon: Interest in a strange or ancient discovery, disappointment and loss over property and gain, some profit and preferment, friends become enemies, trouble through companies or public affairs, difficulties through or misfortune to children. [Robson, p.135.]

With Mercury: Many difficulties, misfortunes, and strange experiences. Disappointment on long journeys, bad for partnership, loss of a relative under strange circumstances. [Robson, p.135.]

With Venus: Unfavorable for love affairs. Strange and peculiar attractions, bad for children and gain, losses through friends. [Robson, p.135.]

With Jupiter: Real or pretended religious zeal, hypocrisy, trouble through legal and church matters, and with relatives, disappointment over inheritance. [Robson, p.135.]

With Saturn: Sorrow and disappointment, mental disturbance necessitating asylum or hospital treatment and probably death there, separation from family or parents, danger of accident involving inability to work or lifelong affliction. [Robson, p.136.]