The history of the star: Tarazed

from p.60 of Star Names, Richard Hinckley Allen, 1889.
[A scanned copy can be viewed on this webpage 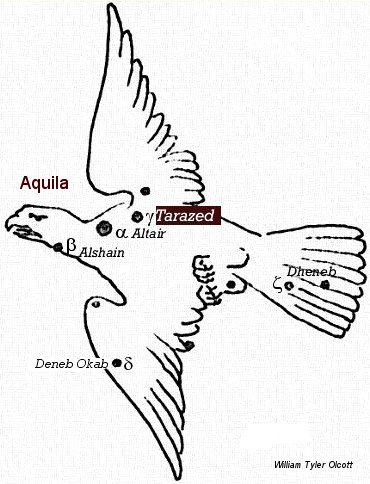 Gamma (γ) Aquila, Tarazed, is a pale orange third magnitude star in the back of the Eagle, lying north of Altair

Tarazed, or Tarazad, from the Persian title, [according to Wikipedia it is derived from Persian term šāhin tarāzu meaning “the beam of the scale”, referring to an asterism of α, β and γ Aquilla]. These three stars; Tarazed with Beta (Alshain), Alpha (Altair); constitute the Family of Aquila, the line joining them being 5° in length.

Alpha (α Altair), with beta (β Alshain), and this star gamma (γ Tarazed) constituted the twenty-first nakshatra (Hindu Moon Mansion) Çravana, the Ear, and probably was at first so drawn, although also known as Çrona, Lame, or as Açvattha, the Sacred Fig Tree, Vishnu being regent of the asterism; these stars representing the Three Footsteps with which that god strode through the heavens, a Trident being the symbol. [Star Names, Allen, p.59.]