The history of the star: Alshain

from p.60 of Star Names, Richard Hinckley Allen, 1889.
[A scanned copy can be viewed on this webpage 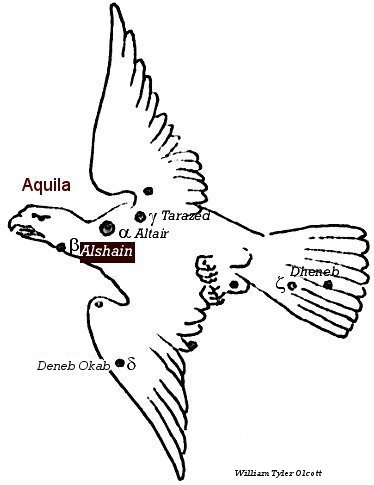 Beta (β) Aquila, Alshain, is a fourth magnitude, pale orange star, and is the southern of the two stars flanking Altair

Although Alshain bears the second letter, beta (β), is not as bright as gamma (γ Tarazed) or delta (δ Deneb Okab).

Alshain is from Shahin, a portion of the Persian name for the constellation; but Al Achsasi termed it Al Unuk al Ghurab, the Raven’s Neck.

Alpha (α Altair), with this star beta (β Alshain), and gamma (γ Tarazed) constituted the twenty-first nakshatra (Hindu Moon Mansion) Çravana, the Ear, and probably was at first so drawn, although also known as Çrona, Lame, or as Açvattha, the Sacred Fig Tree, Vishnu being regent of the asterism; these stars representing the Three Footsteps with which that god strode through the heavens, a Trident being the symbol. [Star Names, Allen, p.59.]

Antinous is now taken as part of this constellation. [Altair is said to be included and those stars south of Altair are; beta (Alshain), gamma (Tarazed), iota, eta and lambda]. Antinous lies just south of Altair in Aquila. No astrological influence was suggested for this constellation by the ancients, but it seems to have been associated with the ideas of passion, love and friendship, for certain of its components stars were named Alkhalimain or Al Halilain, the Two Friends, by the Arabs, and the Kabalists associated it with the Hebrew letter Vau and the 6th Tarot Trump “The Lovers.” It has also been said to give a love of swimming, and to be connected with certain sex irregularities [catamite-pedophilia associations, involving young boys and older men, see the Aquila constellation page for the related myths and stories], the latter probably being greatest in that part of the constellation lying in Capricorn. [Robson, p.27.]