The history of the star: Deneb Okab 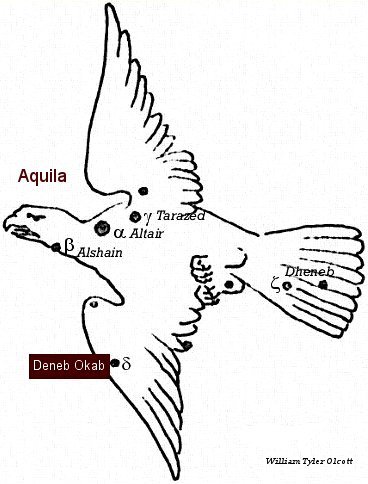 Although this star was always part of Aquila, for a time it was also once part of the constellation of Antinous along with eta and sigma, theta, iota, kappa, lambda, upsilon, all now in Aquila. The constellation Antonius is said to have been introduced into the sky, in the year 132, by the Emperor Hadrian, in honor of his young Bithynian favorite, whose soul his courtiers had shown him shining in its lucida after the youth’s self-sacrifice by drowning in the Nile from his belief that his master’s life might thus be prolonged. This was because the oracle at Beza had asserted that only by the death of the object which the emperor most loved could great danger to the latter be averted. The new asterism, however, was little known among early astronomers; and although Ptolemy alluded to it, he did so but slightingly [likely because of catamite connotations]. [from p.40 of Star Names, a scanned copy can be viewed on this webpage

This star delta, along with eta and theta, of 3rd to 4th magnitudes, in Antinous, were Al Mizan, the “Scale-beam”, of early Arabia, from their similar direction and nearly equal distances apart.

The astrological influences of the star Deneb Okab